Hi, I’m Dr. V. I’m not a real doctor, I just play one on the Internet. What I am is a lady, a lady who is a fool for love! And I love nothing more than sex. My deepest desires have happily led me on many adventures in the sack, but they have also, sadly, made me one of my gyno’s most valuable players. But I’ve lived to tell the tale(s)! So, from time to time, I will dish the dirt on everything from getting freaky to getting freaked out. Now, let’s get this party started…

How It Happend To Me

Who keeps us in the dark about sex toy safety? It’s not the manufacturers. Sadly, it’s the close-minded U.S. Government! They refuse to regulate, examine, or test sex toys, so adult toy makers are able to get away with selling toxic junk without anyone looking over their shoulder. Worse yet, the makers are completely able to shrink from responsibility because the government forces them to market their goods as “novelties” or even “medical devices” — ha! My grandma would probably love it if she could get a dildo from Medicaid. But all jokes aside, in America, private businesses like Babeland and organizations like The Coalition Against Toxic Toys are working to help educate consumers. Hallelujah!

The number one sign a toy is toxic is the smell. Overall, if you can smell it, the toy stinks! The odor you sniff out is caused by a release of chemicals which, if you put the toy into your crotch, will release all up in your business. That’s no good…on it’s own. But if you cover that lil’ stinker with a condom every time you use it and in between partners, you’ll be okay. So, if you do want to save some cash and by a cheaper toy made of noxious materials, that’s fine so long as you wrap it up with a love glove.

Read the box! It’s as simple as that. Find out what your toy is made of. The #1 thing to look out for is phthalates. Tough word to spell, but it’s a sign that the product will easily deteriorate. Basically, phthalates take PVC plastic (the stuff pipes are made of) and soften it up to be used in cushier toys. Unfortunately, phthalates are sorta like 18-year-olds. Since they aren’t chemically bound to their PVC parent, they break free and get lost. So, your toy has a short shelf life and will last no more than a couple of years — and, again, you should use a condom with any toy containing phthalates. According to the Danish Environmental Protection Agency, unless you’re pregnant or nursing, you can be exposed to phthalates for up to an hour a day without repercussion. You can read their full report here.

Here are some common material options with their pros and cons: 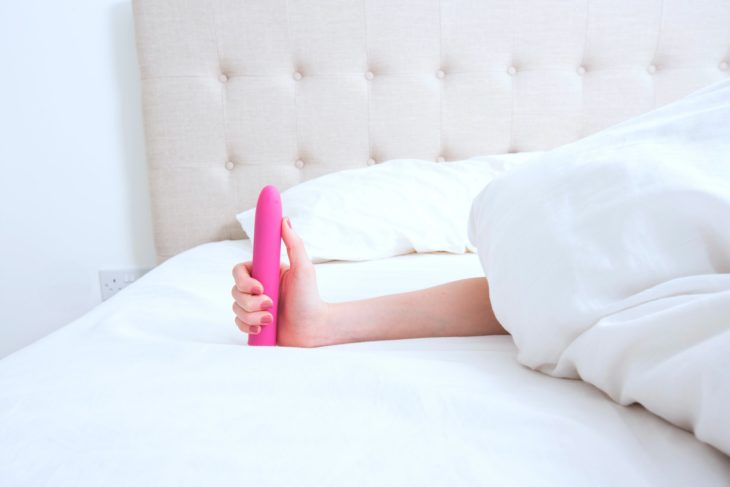 Where I Went Wrong

Depends on how stodgy you are. There’s no shame in ownership, women have been using them since the Stone Ages. If you’re Dr. V, you might keep it discreet by storing it in a satin bag in a drawer. A lot of people choose to order toys online and many places ship in discreet packaging. Heck, even Amazon sells ‘em!

1. Sharing Is Caring: If you are going to use your toy on multiple partners, it’s a good idea to wrap it in a condom for each person. This way, you won’t have to worry about sterilization in the heat of the moment and some toys aren’t able to be disinfected because they’re porous. Even if you are just using the toy yourself, bacteria lives in those holes. So, make sure you still use a condom. Safety first!
2. Clean Jean: Always clean your toys between uses.
3. Water Tight: Since vibrators run on batteries, there is NO risk of electric shock. However, you should only take special toys, made explicitly to be waterproof, swimming with you.
4. Lube Job: Check the kinds of lube you can use with your vibrator. In some reported cases, lubes have melted toys. Make sure your lube and toy are compatible.
5. Yummy: You should buy sex toys that are made of medical or food grade substances so it’s safe for your sexy bits and also hypoallergenic. After all, who wants to have a bad reaction to their new toy?

How to be a great painter with no previous experience

Tips on Changing your Address