Hi, I’m Dr. V. I’m not a real doctor, I just play one on the Internet. What I am is a lady, a lady who is a fool for love! And I love nothing more than sex. My deepest desires have happily led me on many adventures in the sack, but they have also, sadly, made me one of my gyno’s most valuable players. But I’ve lived to tell the tale(s)! So, from time to time, I will dish the dirt on everything from getting freaky to getting freaked out. Now, let’s get this party started… 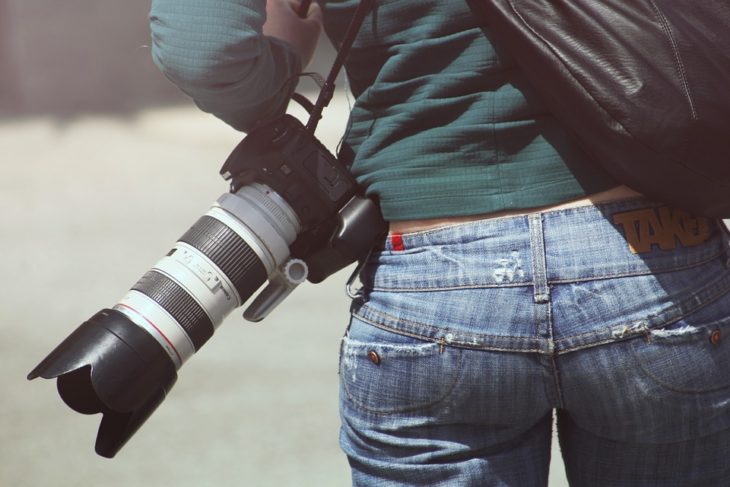 Despite the big fuss made over virginity and sex, studies have show that 70-75% of women do NOT orgasm from vaginal intercourse. That leaves about a quarter of women who can and some people attribute that to the G-spot. Now, there are a lot of haters who will tell you the G-spot is like Narnia or a UFO — a myth, an orgasmic tall tale. Helen O’Connell in 1998 theorized that it’s just an extension of the clitoris — although, at least she believes there’s something there. Shockingly enough, so little research has been done on the vag, it is practically like Area 51. Back in 2001, the American Journal of Obstetrics and Gynecology published, “the evidence is far too weak to support the reality of the G-spot.” In 2006, the Journal Of Sexual Medicine said in 101 vaginal biopsies they didn’t find a single particular erogenous zone. Surprisingly, but in fact, the “G-spot” isn’t even an accepted part of the female anatomy according to the medical community. Pfft! While these academics can argue over its existence, anyone who has ever had sex with me can tell you there is no denying it! And in 2008, aray of proof/hope from researchers in Italy shined a light on the G-spot’s location and power. Listen up: the G-spot is NOT the sexual version of Santa Claus. It really does exist!

HOW IT HAPPENED TO ME 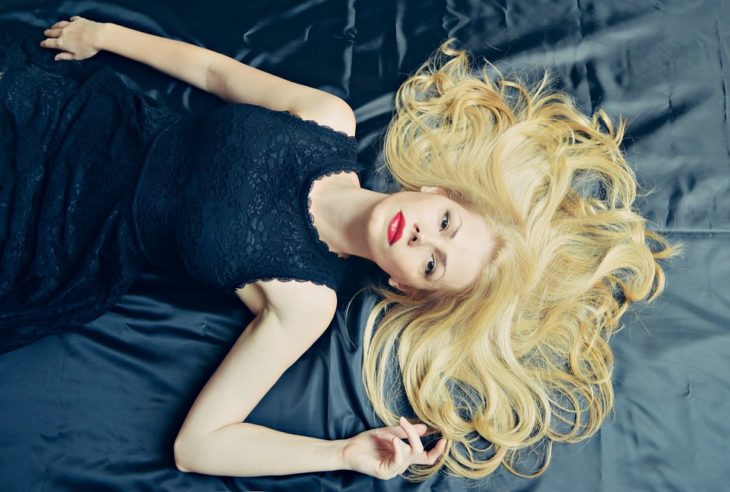 I always liked intercourse and an old-fashioned hand job more than oral sex — which was weird based on what my other lady friends told me. I used to say things like, “I prefer penetration,” to my partners. Then, one dude I was dating said to me, “I’m going to make you squirt.” I thought he was just being enthusiastic…but then, he finger-banged me and I actually did! I was shocked and amazed! I had only seen that kind of thing on “The Howard Stern Show.” But seriously, I came harder and faster than I ever had. Finally, my sexy time preferences all clicked. To this day, I still think of that magic man as the one who got away….

WHO’S TO BLAME
So little is known about the G-spot. It was named for German gynecologist Ernst Gräfenberg, the doc who discovered it. Yeah, just like Columbus discovered America. It was always there, yet it bears his name. But some credit is due for proposing and publishing the first theory on the hot spot in a little paperback book in 1950. The G-spot didn’t become common knowledge until 1982, when the pop culture book, “The G Spot and Other Recent Discoveries About Human Sexuality” by Alice Kahn Ladas, Beverly Whipple, and John D. Perry, was published. With a million copies in print, they’ve really spread the word!

SIGNS
2008 had plenty of negative news, but there was one incredible step made towards ecstasy! This past year, researchers, lead by Emmanuele Jannini at the University of L’Aquila in Italy, found evidence that the G-spot is located on the front side of your vagina, not far from your belly button. Using an ultrasound, they discovered an especially thick tissue lining in women who experience vaginal orgasm. That’s the awesome part, as now doctors can detect whether you have it. However, the downside to their discovery is that they found only about eight in 30 women have this kind of private part. Of those eight, five already knew they could get off through vaginal intercourse. The other three were shown the spot and how to hit it. Two of them were then able to get a Big O that way.

So, if you can’t find yours, you’re not a bumbling sex idiot. It’s simply that you, like most women, don’t have what is considered a G-spot. It does not mean you can’t still come harder than a freight train. Just keep in mind that the attention paid to your lady bits should be mostly directed at the clitoris.

There are a couple ways to manually and sexually test for a G-spot. Sure, you could go get an ultrasound, but that isn’t nearly as fun as what I have in mind. Here are two ways to finger things out:
1. The Running Man: When you’re getting a hand job, have him go in palm up and stroke, moving two fingers like they’re running a marathon. Check out this awesome instructional video for technique.

The G-spot is no more than three inches in and should feel like a spongy piece of tissue. It can range in size from a pea to a quarter. It might take a few fondles to arouse, so feel free to rummage through your cubbyhole. But if you’re not feeling it, no biggie. Believe me, you’ll know if you got one.

WHERE I WENT WRONG
Don’t get me wrong, the clit is a wonderland — the only human organ purely devoted to pleasure with over 8,000 nerve endings; that’s double the amount on the head of a penis and more concentrated! So, don’t feel like you’ve got a busted box just because you don’t have a G-spot. It’s kind of like super-sizing a fast food meal. You’re not getting any more meat and you know you don’t actually need all those extra fries and soda. Plus, once you start getting all those extras, you can’t stop! Let me tell you, I am so disappointed when a guy can’t figure out how to get me off through my tunnel of love since he’s never been with another woman who’s had a G-spot. Alas, it’s a blessing, and a curse. Let me tell you how uncomfortable and frustrating it is to insist you can squirt, but the dude can’t manage to hit the spot. This happens four out of five times, roughly. Like anything, it takes a special gentleman.

I can orgasm via my G-spot in a way that makes me want to time it with a stop watch. Anyone who says women take twice as long as men to get off, haven’t tried to hit the G-spot (or used a vibrator for that matter). Although there are arousal factors involved…just like with any other sexual stimulation. You’ve got to be feelin’ it! According to the Kinsey Institute (yes, disciples of THE renowned authority, Alfred Kinsey), the G-spot is a “female prostate” that gets swollen from arousal. Because of its handy dandy location, when it puffs up, you can stroke it through the vagina — just like a man’s prostate can be stroked through his anus. The Skene gland/G-spot origins are believed to begin back when we were embryonic and had the chance to become male or female. In all men, a prostate takes form. Now, using that same matter floating around, a small percentage of baby women can develop Skene glands, commonly referred to as the “female prostate.”

Now, the Skene glands have the ability to produce a liquid similar to the the serum sperm swim in. Its chemical makeup is prostatic acid phosphatase and prostate specific antigen. This is what gets ejaculated, which is why many also compare the G-spot to the male prostate. And here’s the weirdest part — while it’s totally NOT urine, it shoots out your urethra. Surprise!

EMBARRASSMENT FACTOR
Studies have shown that although 25% of women have a G-spot, only 10% can ejaculate. So now a warning to that 10% — while squiting can be really fun, it can also be really messy. Make sure you go for the golden G-spot somewhere you don’t mind getting wet. Although, it is easier to clean up since the ejaculate isn’t viscous and much more similar to water.

TIPS
1. Frankie Says Relax: You have to chill and go with it to orgasm, no matter where that orgasm is coming from. So, get in the mood and then do it to it! Don’t put too much pressure to find something you may not actually be able to. Everyone orgasms from different things, anyway.
2. Come Hither: That’s the finger motion that does the trick. Don’t be afraid to apply pressure, since the Skene gland is behind the thick lining.
3. 2-for -1: Sometimes adding a gentle massage outside the vagina, on top of the mons pubis, can also help stimulate the area.
4. Curve: A penis with a natural swoop up is totally made for the G-spot! He’s gonna hit it without even trying.
5. Positioning: Two positions are best for stroking the G-spot during intercourse: doggy and cowgirl. Yeehaw! 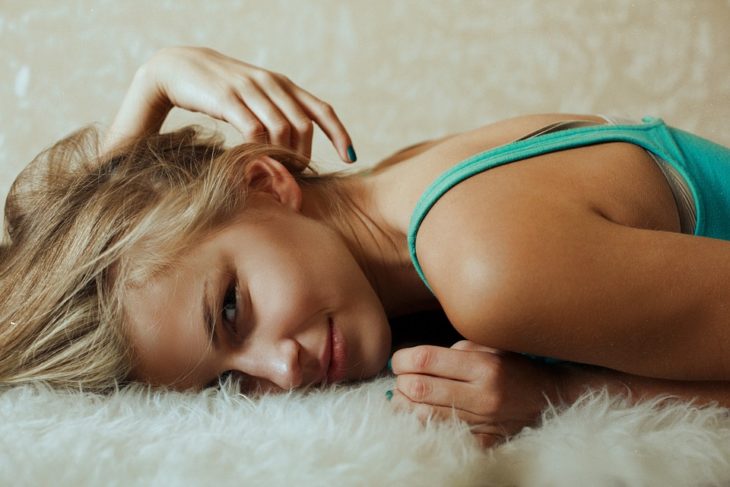 A lot of women make a key mistake: they think they have to pee just as the sex is getting really hot for them. In actuality, they’re not going to pee, they’re going to orgasmically release the fluid from their Skene gland. So, seriously, follow tip #1. Sex is messy, dirty, smelly, sweaty, squishy, and sloppy. No need for apologies just because you enjoy it. Despite how civilized we get as a society, we’re still animals. So give it up and turn it loose!

FUNKY FACTS
1. “G-Shot Parties” are quite the new fad! Women gather at a gyno’s office and get a shot of some special elixir into their G-spot area (ouch!) …together (double burn). The procedure was invented by a “Dr. 90210,” gyno David Mattlock of the Laser Vaginal Rejuvenation Center in Los Angeles. (The mere name of that office makes me want to puke.) The injection lasts four months and costs $1850 a pop. Now that’s some pricey poonani!

2. The G-spot is referred to as the “sacred spot” in tantric sex because is considered to be the heart of a woman’s emotions.

3. Ladies man Prince is on a quest for the G-spot like it’s the Holy Grail. Supposedly, he memorialized his hunt in an unreleased song with this chorus, “G-spot, G-spot/ Where, oh where can U be?”

4. Like a fine wine, G-spot orgasms get better with age. When women enter their 30’s, their estrogen levels drop, causing a delightful domino effect. As a result, the vaginal lining gets thicker, making the sex feel so much more awesome.

Easiest Ways to Lose a Steady Amount of Weight