Gee, I Wonder Why The Man Behind “Sleepless In Austin” Is Still Single

I am desperately hoping Sleepless In Austin — allegedly the work of a photographer named Larry Busby who goes by the name Romeo Rose — is a prank.

But given that he’s offered $1,500 as a “finder’s fee” for the person who finds him a girlfriend and an extra $1,000 if it leads to marriage, this miiiight be serious.

Now, we could all use a little extra scratch. Shouldn’t be so hard to find some bro in Austin a lady, right? Well, let’s take a look at Larry Busby’s dating requirements!

These are all direct quotes from Sleepless In Austin (which appears to be having server issues, ergo I referred to this “mirror” of the site that has been copied): 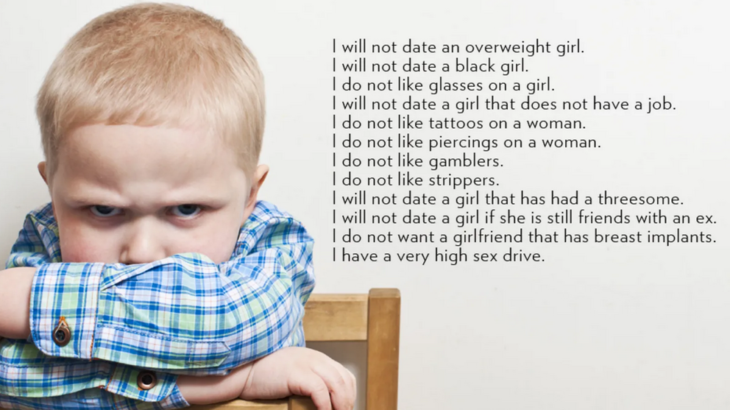 Please, ladies. Let’s all make a pact with each other to encourage absurdly entitled men to the farther reaches of their absurd entitlement so they don’t poison the  normal-person dating pool of not-insane assholes. Agreed? Agreed.

P.S. Mr. Sleepless In Austin may or may not have done his very own Reddit “Ask Me Anything” last night, although the veracity of this cannot be confirmed.

10 Reasons Internet-Famous Cats Are Better Than Real Cats — In GIFs!