Girl Talk: Why I’m An Out And Proud Bisexual

Let me tell you a story about “bi invisibility.” A few years ago, at my first full-time job – which, I should clarify, was at an LGBT nonprofit organization – I was chatting with a gay male co-worker about a conversation he had with an acquaintance of ours. Apparently I had come up in their conversation, and he had referred to me as “straight.” As in “heterosexual.” I don’t know where the rest of the story was going, because I stopped my colleague right there.

“Actually,” I interjected, “I’m not straight.”

He seemed genuinely baffled. “You’re not?”

His eyes widened and he smiled. It was like a light bulb had gone off in his head and everything suddenly made sense. Meanwhile, I walked back to my cubicle, shocked that, at an LGBT organization, anyone would assume that anyone else was straight. It surprised me that, in a space where identity politics and queer issues were discussed regularly, being in a relationship with a man would automatically signify me as a hetero. I suddenly realized that my identity as a bi woman would always be invisible. I would always be invisible. That is, unless I found a way to combat that invisibility. 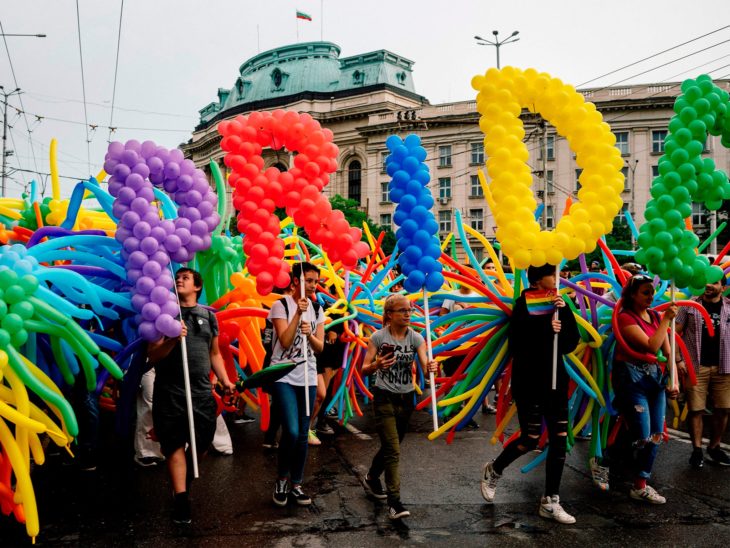 It’s harder to fight against bi invisibility than it is to fight against biphobia, because bi invisibility isn’t necessarily a form of bigotry. Lots of well-meaning queer and queer-friendly people have nothing against non-monosexual folks at all – they just don’t tend to think about us. Bi invisibility is really just an assumption. It’s the assumption that, because I’m married to a man, I’m obviously straight and have always been exclusively attracted to men. It’s the assumption that, because I’m not currently in a relationship with a woman, my previous relationships with ladies amount to little more than a phase I went through in college. It’s the assumption that, when I walk past a newsstand, I don’t do a double take when a particularly lovely swimsuit model catches my eye (I’m looking at you, Kate Upton).

Most significantly, bi invisibility is the woefully ignorant assumption that human sexuality – a complex phenomenon which scientists and psychologists and queer theorists have been researching and questioning for decades – is actually just a simple binary. You can either be gay or straight. There’s no in-between, no all-of-the-above, no none-of-the-above. There’s no room for anything outside the norm.

I can’t really blame my well-intentioned gay and straight friends and relatives for not always thinking about bisexuality, because bi invisibility is so much bigger than them. It’s not really about a few thoughtless incidents here and there – it’s a widespread social problem with very real ramifications. Bi invisibility means that, even though there are more self-identified bisexuals in the U.S. than there are self-identified gay men or lesbians, funding for bi-specific organizations and programs is disproportionately low. Though, part of the issue there could be that funders don’t know where to find bi-specific organizations and programs since, up until this month, words like “bisexual” and “bisexuality” did not auto-complete were blocked in Google’s Instant Search. And what are the results of all this invisibility? Suicide rates among bi folks increase, health and wellness among bi folks decrease, and before you know it, bi communities are left to deal with issues like poverty, workplace discrimination, and domestic violence without solid support from the rest of the queer movement. What begins as a relatively minor issue of misidentification quickly becomes a systematic silencing and ignoring of millions of people.

So if all of this is “bi invisibility,” what, exactly, is “bi visibility:? For me, it means talking about my identity as a bi woman as often as possible. Unfortunately, being open about one’s bisexual identity is still a radical act, because it’s just not something that many people discuss regularly. For instance, I’ve known a lot of bi people – bi women, in particular – who choose to publicly identify as straight or gay, depending on their current partner’s gender, or who don’t publicly discuss their sexual orientations at all. I’ve also known non-monosexual people who resist calling themselves “bisexual,” because they believe the label affirms the gender binary (even though it doesn’t). It’s hard for a visible bisexual community to exist when the identity remains so taboo.

The thing is, I try not to judge non-monosexual or bi-identified folks for publicly identifying as something else … because I’ve been there. I first came out as bisexual when I was 15, but I soon changed my label of choice to “lesbian,” because I found myself predominantly attracted to women and, due to the lack of bi visibility everywhere I looked, I felt forced to pick a side. I wasn’t consciously lying to myself – I truly thought that I was a lesbian. That is, until I fell in love with the man who later became my husband. And even though I was happy to call him my boyfriend when we started dating, I still didn’t like that pesky bisexual word. I avoided it as long as I could, until I was out of college, working in the LGBT movement, and realized that my silence was contributing to the problem.

I’m not saying that all non-monosexual folks must identify as bisexual. I’m not interested in policing identities like that. I am saying that if you’re bisexual, pansexual, queer, or some variation of non-monosexual, and being out about your sexuality wouldn’t put you in a dangerous position, please consider coming out. Talk about your identity with gay and straight folks, even – especially – if they don’t understand. Pay attention to the ways in which bi communities and issues are made invisible, and make some noise about them. Cheer extra loudly when the small contingents of bi activists pass by in Pride parades – or, better yet, make those groups larger by marching with them. Bi visibility is critical, and it will only exist if bi people make the effort to be visible.

This Monday, September 23rd is Bi Visibility Day. Take this as the opportunity you’ve been waiting for and make yourself visible. In the process, you’ll be making an entire movement visible, too.

How To Safely Do Intermittent Fasting