I’m Really Sorry, But That Gawker Whole Foods/Katie Holmes Exposé Is Not As Exciting As It Seems

J.K. Trotter at Gawker’s Black Bag vertical did a very, very, very in-depth investigation of a claim from 2012 that Katie Holmes, living at the Chelsea Mercantile at the time, shortly after she left ex-spouse Tom Cruise, had a secret entrance to the Whole Foods that occupies the ground floor of the building. Paparazzi had photographed her coming out of the store with her daughter Suri, but had never seen her going in through the official entrance to the store on the corner of 7th Avenue and West 24th Street.

I’m going to include spoilers, here, but I do recommend that you go and read the whole, detailed thing, because it’s funny — although it might be funny to me for reasons that are unintentional. I worked for Whole Foods for three and a half years, mainly at a store in the southwest suburbs of Chicago, but also at the company’s largest store per retail square footage in the country in Chicago’s Lincoln Park neighborhood, and I staged and helped out at a few other suburban stores as well. Suffice it to say, I know what a Whole Foods back-of-house predictably looks like, because by and large, they all look the same. The Chelsea Mercantile Whole Foods is no exception. 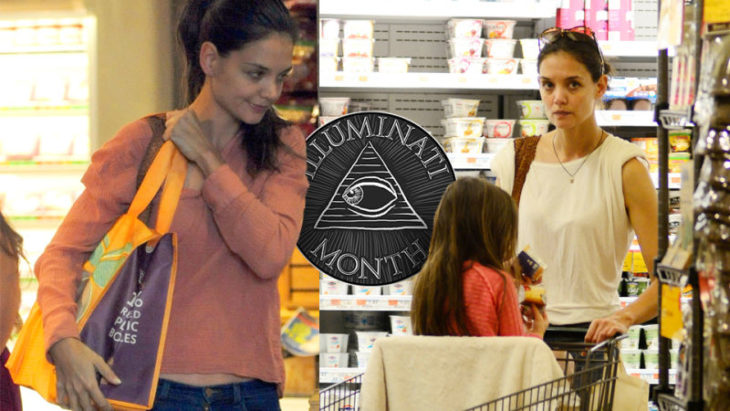 Trotter quotes another investigation by Jordyn Taylor for the New York Observer in 2013, during which an employee told Taylor, “There’s no Batcave in here, there’s only one door.” Trotter sets out to refute that claim, and succeeds. Technically, there are many doors to a Whole Foods, because not having many doors to a Whole Foods would be a fire hazard. That’s not an “a-HA!” moment so much as retail common sense, but you get the picture — there are emergency exits on the outside of the building, garage doors in the back for their loading dock, and an employees-only exit right next to the loading dock where, I can tell you with 99.99 percent assurance, employees are only allowed to go if they either work in receiving and need to talk to the truck drivers who deliver loads or if they’re taking out the trash (in other words, employees don’t enter through that door, they only enter through the official front entrance, it’s policy).

What’s different about this particular Whole Foods from other Whole Foods that I’ve worked in or visited — and yes, I visit Whole Foods stores when I travel, I am a Whole Foods tourist to this day — is that they’ve separated their Whole Body department (what would be the pharmacy/beauty department in a conventional grocery store) from the grocery portion of the location as a stand-alone store. And what Trotter finds, again, predictably, is that there is in fact a way to get to the produce section of Whole Foods from the stand-alone Whole Body store through the “cellar” of the Mercantile building.

This seems like a surprise to Trotter, and I really hate to break it to anyone who was surprised, but Whole Body employees are employees of the Mercantile Whole Foods location. Of course they share back-of-house common areas with the grocery store. I would bet anything that they don’t have separate management, so not having a connecting, back-of-house passageway between the two wouldn’t make any sense.

Trotter, I assume without permission from the Store Team Leader (STL), took this passageway from Whole Body to Whole Foods, taking pictures along the way. This is where my Whole Foods veteran brain screamed “THERE ARE FINANCIALS DOWN THERE! THAT SHIT IS CONFIDENTIAL! THIS IS A LIABILITY!” — but then immediately stopped caring and started thinking, instead, Yep, this looks like every single other Whole Foods back-of-house in existence. In the pictures, we’re treated to a glimpse of the break room, signage aimed at employees about the store’s Core Values, a peek at what looks like one department’s schedule for the week (also confidential information, BTW), and some typically Whole Foods-ian stairwells. The only thing I was surprised to find out was that apparently, all Whole Foods locations use the exact same filing cabinets. ¯\_(ツ)_/¯

It’s sort of posed as illicit and undercover, but here are my thoughts on that:

If you have any burning questions about how Whole Foods works, feel free to e-mail me at [email protected]. It might save you some time.