Kendall and Kylie Jenner “wrote” two sci-fi novels, and I read them both because I do not love myself

Kendall and Kylie Jenner are known for their family name, their modeling careers, and their continuous Instagram selfies, but being published authors? That’s not exactly what the world knows or expects of them. I try my best not to keep up with the Kardashians (or Jenners), but it’s hard to live in this world and ignore their existence entirely, so I decided to go all in and read both of the Jenner sisters’ sci-fi novels with only one expectation: that they would be unbearably bad.

Rebels: City of Indra: The Story of Lex and Livia

came out in 2014, and the excessive number of colons in the title were a clear clue that it would be a mess. Despite the brutal reviews, the 19- and 21-year-old sisters decided to slap their names on the sequel, Time of the Twins: The Story of Lex and Livia

, that came out in November. Their manager, Elizabeth Killmond-Roman, worked on the young adult novels, and each had a co-ghostwriter; Maya Sloan was replaced with Katherine Killmond after the first book flopped.

Switching up who actually wrote the books didn’t help much, though, and both were as one-dimensional as the Jenners appear to be. If you’re unfamiliar with the basic plot, here’s what you need to know: Lex and Livia are both orphans living in the city of Indra, a dystopian colony enclosed in a bubble after a Great Catastrophe ruined the Earth. 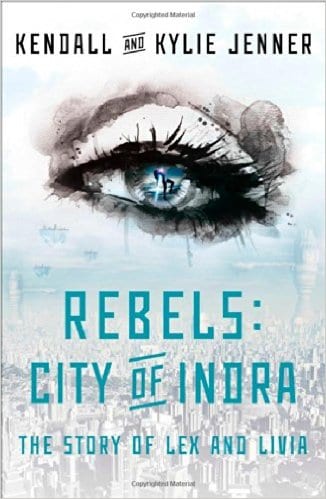 While Livia grew up extremely privileged and well taken care of, Lex suffered in an orphanage before being recruited for military-esque special ops training. As the title of the second book reveals, Lex and Livia are really twin sisters, separated at birth because Indra is essentially China in the ’80s and forbids couples from having more than one child. As they end up involved in a rebel plan to stop the elite in charge of the city from eradicating the lowest class of people, they learn just how elitist and controlling the city is and discover the true identity of the parents they never met. It’s essentially a shittier, sci-fi Parent Trap.

Knowing only that the Jenners are rich and spoiled, Livia’s life seems to mimic their existence the most. She has a huge house on a private island, a governess that looks after her, private tutors, and is always expected to look flawless. Also much like the Jenner-Kardashian world, the wealthy people of Indra are expected to get “enhancements” (i.e. plastic surgery) to perfect their bodies and keep them from aging.

The dialogue throughout both books, but especially Time of the Twins, made them mind-numbingly boring. Most of the time the characters are stating the obvious in short, choppy sentences that don’t flow like a real conversation. But, hey, maybe that’s how Kendall and Kylie talk IRL. I even tried getting high to make reading them more interesting (you know, for journalism) and I still couldn’t get into it.

The authors did manage to create a few moments of suspense, but for a sci-fi story with multiple fight and chase scenes, it didn’t feel exciting at all. The only truly suspenseful instances are caused by someone doing something stupid and causing a problem where there shouldn’t have been one. Again, this could be a fair portrayal of the Jenner sisters’ lives, but I don’t want to make too many assumptions. What was most disappointing about the YA novels, though, was how a seemingly feminist story about two badass twins fighting to save people from an evil government quickly reverted to lame love stories and antiquated ideals of femininity. While training to be a “proper lady,” Livia has to go to etiquette training, where she learns how to tie sashes (proper ladies wear sashes, I guess?), which tiny fork is used for which dish at dinner, and has her waist cinched in what sounds like a horrifyingly painful exercise. Even when she breaks free from that world, she’s portrayed as the classically feminine, weak character who falls in love at the drop of a hat.

I highly doubt Kendall and Kylie even read these books cover to cover, especially considering Kendall said at the 2014 Billboard Music Awards she’s “the worst reader ever.” If you compulsively buy anything the Kardashian-Jenner clan touches, maybe stick to their clothing, Kimoji, and lip kits and don’t waste your hard-earned cash money on their uninteresting books.

10 Names For The Opposite Of An Erection