Sin City: A Dame to Kill For – Review

Having woken up on the highway surrounded by corpses, the thug Marv (Mickey Rourke) is trying to remember what happened last night. Young gambler Johnny (Joseph Gordon-Levitt) is trying to beat poker’s most influential city gangster, Senator Roark (Powers Booth). In the life of private investigator Dwight (Josh Brolin), his former lover Eva (Eva Green), now the wife of a wealthy businessman, returns. Finally, stripper Nancy (Jessica Alba) is preparing to take revenge on Senator Roark for the death of detective Hartigan (Bruce Willis), who appears to her in a dream and reality.

Neo-noir anthology Sin City was one of the brightest films of 2005. Famous actors, colourful characters, and the dynamic direction of Robert Rodriguez would have made him famous, even if he had nothing else. But Sin City had an ace of trumps – a unique visual style that brought the technical Cannes Film Grand Prix to the movie. A good description would be Like a shot of pure adrenaline straight to the heart.

Having shot the whole picture against the background of the green screen, Rodriguez and his co-author Frank Miller, the famous creator of comics, then freely manipulated the image, playing with contrasts of light and shadow, black and white, colour and black and white details. Sin City was a feature film, but it looked like an artistic comic book for adults – gloomy, exciting, cruel, and at the same time trashy and highly artistic. The film was screened at the 2005 Cannes Film Festival and garnered attention from all critics as an exciting piece of art. The films production stayed true to Rodrigues plan and truly stayed faithful to the comic book adaption. A fantastic presentation that was well shot, lit and captured the look of the comic books. 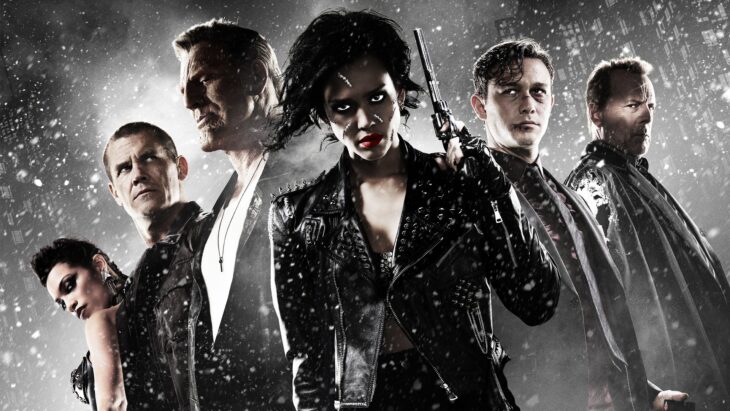 Comparing any scenes of two movies, it is easy to determine which of the films was the first and which was the second. Against the backdrop of Sin City 2, the 2005 film seems to be a breakdown of the pen – visually the sequel is much bolder, more spectacular, uncompromising, more inventive, and more comic. As a result, there is no screenwriting in the credits; simply “Based on the graphic novels by Frank Miller”.

Rodriguez and Miller raised the bar at once by several divisions. Especially in action scenes that have gained momentum and scope, not characteristic of the first movie. To explain on the fingers, however, this is impossible. Sin City 2 needs to be seen in order to appreciate how far one could get away from the artistic finds captured in the previous film.

One of the most notable scenes that deserve mention, in my opinion, is the poker scene. When Johnny is playing poker, he shuffles the cars with one hand, which is very pleasing to watch. It is the thing that even the award-winning PlayAmo cannot boast when they offer live casino games to customers, not to mention real casinos. It is a skill that is very hard to master. But Joseph Gordon-Levitt managed to do that, and supposedly, there are rumors he watched a lot of dealers to practice this shuffle.

The plot of Sin City 2, on the other hand, makes you twist your lips at every step. The opening film about Marv, however, is quite funny, and the novella about Dwight and Eve, at least, ticks off traditional noir graphs (a detective tormented by the past, many-sided femme fatale, a nightmare-looking criminal boss), although it does not offer anything more entertaining than the naked body of Eva Green. But these two stories are borrowed from Miller’s comics, and the author obviously had time to think about them. Two other short stories were invented specifically for the film and therefore composed in haste, with a minimum of inspiration and wit. 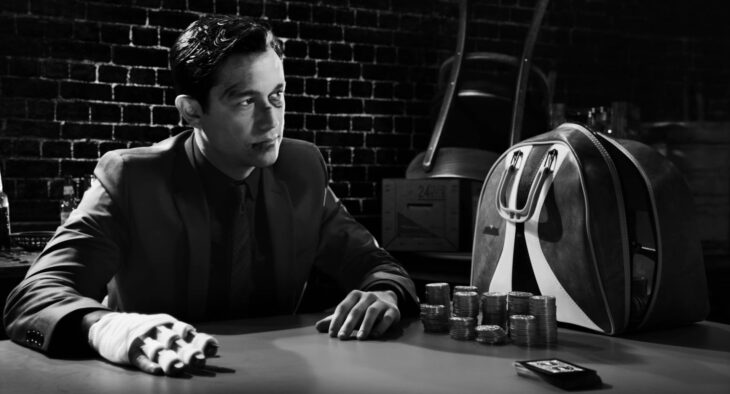 Particularly annoying is the short story about Johnny, where there clearly should have been sudden plot twists and ingenious plans. Instead, the plot develops as straightforwardly as possible, and the finale is not struck by the presence, but by the lack of cunning for the hero, who seems to have been preparing for the battle with Roark for more than a year. Really, during this time it was possible to come up with something smarter than a three-point plan with the word profit at the end!

The story of Nancy, however, is even more straightforward. But she, in essence, was just an epilogue to the first film, and her intriguing plot moves remained in 2005.

The most unpleasant aspect of the picture is its “repeatability.” In 100 minutes of screen time, the heroes three times storm the estates in which their enemies took refuge. At the same time, Marv takes part in two assaults (by the way, brilliantly played by Mickey Rourke). Yes, three assault scenes are not exact copies, but was not it possible to come up with something else? For example, in one fragment, the heroes storm the estate, in another – a skyscraper, and in the third – a dungeon. And it was possible to do without three storms and invent something more original. And so, when the characters go on the third campaign, it causes nervous laughter and complete disappointment.