Sicily – there’s no place like it. Boasting everything from pristine marine reserves to scenic UNESCO World Heritage sites, the Italian island of Sicily is the perfect destination for luxury travelers, nature lovers, foodies, and sunseekers, as well as everyone in between.

The landscape is as diverse as it is stunning. Just off the south coast of Italy, triangle-shaped Sicily entices travelers with breathtaking landscapes, fairytale architecture, vine-carpeted hills, perfect weather year-round, and the best ice-cream in the world. Sunny Sicily has so much to offer.

Given that we are entering not just a new year but a new decade, it’s time to go big in 2022. Get set for a year of memorable trips. We have rounded up the five top hot spots in Sicily you won’t want to miss. 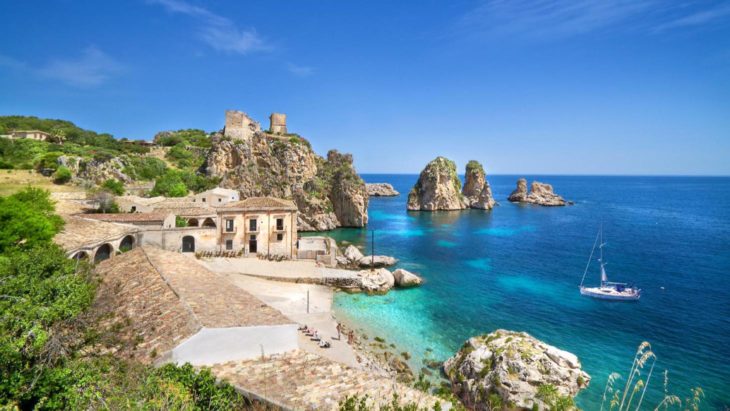 Set high above the bay of the so-called Tonnara, once home to an ancient tuna factory, Scopello is a beautiful little village close to Castellammare del Golfo, in the northwest corner of Sicily.

With picturesque fishermen’s houses around a cove hugged by steep-sided cliffs, the atmospheric old Tonnara di Scopello is one of the most photogenic locations in sun-kissed Sicily. Here you can try mouth-watering fresh seafood while enjoying spellbinding views of the Faraglioni that rise out of the crystal azure Mediterranean Sea.

Did you recognize it? Yes, this is the exquisite setting where the Dolce & Gabbana Light Blue ad with British model David Gandy was filmed. The idyllic, picture-perfect village of Scopello starred in a number of commercials, films, and television series, including scenes from Ocean’s Twelve with George Clooney, Brad Pitt, and Catherine Zeta-Jones, and an episode of the Inspector Montalbano TV series. Remember?

Just 40 minutes from the central city of Palermo, Scopello is a perfect base for spirit-lifting hikes through the nearby Lo Zingaro Nature Reserve, pictured below, home to a network of coastal walking paths which rise through wildflower-carpeted hills before dipping to pristine white-sand beaches, otherwise only reachable by boat. 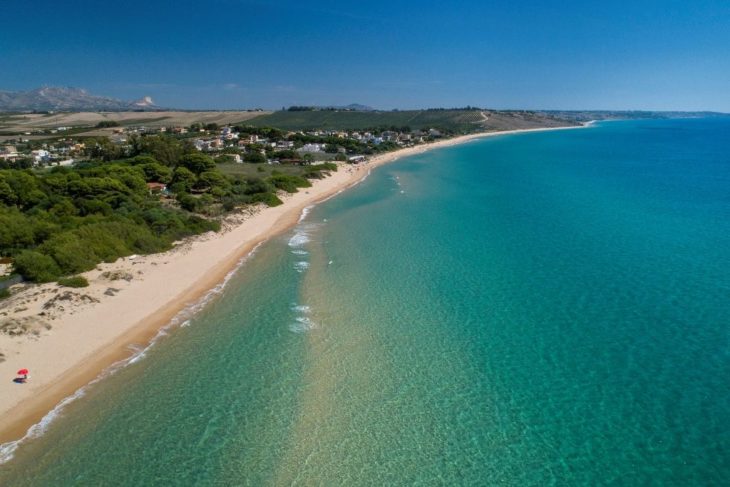 About 350 feet above sea level, the exquisite, quaint town of Menfi – not to be confused with Memphis, Tennessee – is one of Italy’s best-kept secrets, where the charm of old Sicily seems to remain intact.

Still, largely off the tourist radar, this is Sicily’s largest grape-growing region, home to Planeta, arguably the island’s foremost producer of quality wine. This part of the island is ideal for getting to know the real side of Sicily, from its extraordinary cliff-side villages to its shimmering coastline and idyllic Blue Flag beaches.

Carpeted with gently rolling hills overlooking the sand dunes of the nearby coast, the ancient wine-making town of Menfi is the perfect place from which to explore the corners of south Sicily that tourists haven’t yet found out about. 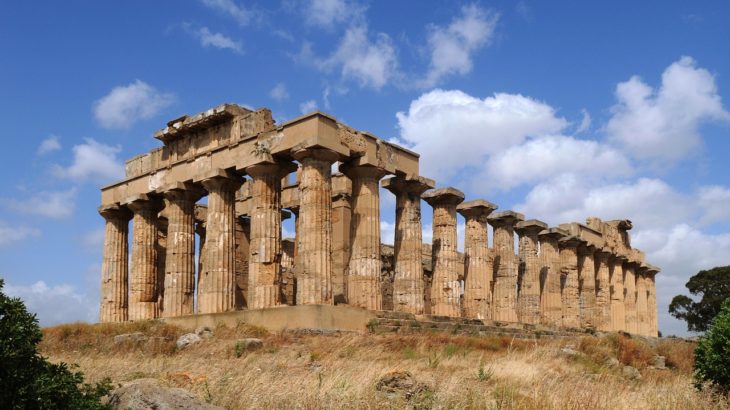 On the southern coast of Sicily lies Selinunte, one of the greatest archaeological sites in the Mediterranean. Taking a walk along the spectacular coastal path to the Selinunte Archaeological Park at sunset to a soundtrack of cicadas and birdsong is a must on any trip to heavenly Sicily.

Scenic and majestic, the pinkish-gold Ancient Greek ruins at Selinunte, between Sciacca and the coastal town of Mazara del Vallo, are as impressive as the more famous Valle Dei Templi (Valley of the Temples) in Agrigento, but way less busy.

In the province of Trapani, the Greek archaeological site of Selinunte is the place where, in July 2019, Google put on an exclusive three-day conference known as Google Camp, attended by a select group of billionaire businessmen, tech gurus and top celebrities from all over the world. 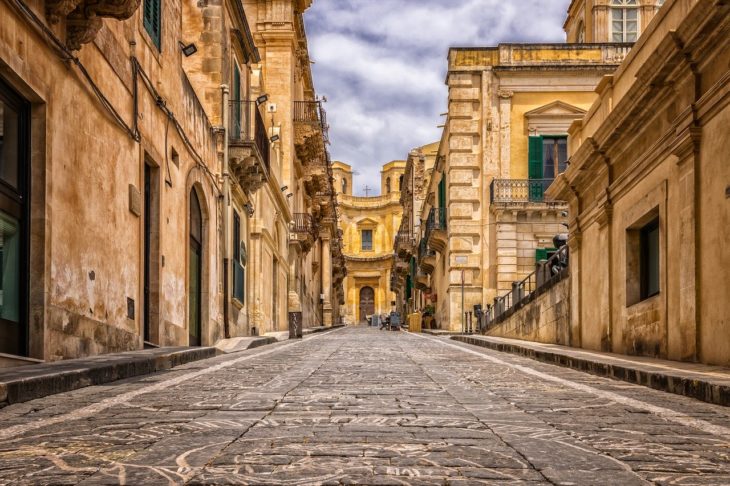 It wouldn’t be an exaggeration to say that Noto, a pure gem of Baroque art on the south-eastern coast of Sicily, is one of the most beautiful places in Italy. A UNESCO World Heritage site, Noto is, quite simply, the apotheosis of Sicilian Baroque architecture and town planning. This fabulous Baroque town in southeast Sicily will make you go “wow!” and reach for the camera constantly.

While you are there, make sure to sample a delicious, artisanal granita, a semi-frozen dessert similar to an American snow cone. Noto serves up some of the best granitas in Sicily.

The Baroque pearl of Noto is also famous for its flower art festival, known as Infiorata. It is an annual spring celebration that turns Via Corrado Nicolaci into a magical floral carpet, where local artists create elaborate designs with thousands of flowers. It usually occurs during the third weekend of May.

Arguably the most beautiful town in Sicily, Noto, is not to be missed. You will be amazed by its beauty, especially in the late afternoon when the Sicilian sunshine casts the limestone façades with a honey glow. 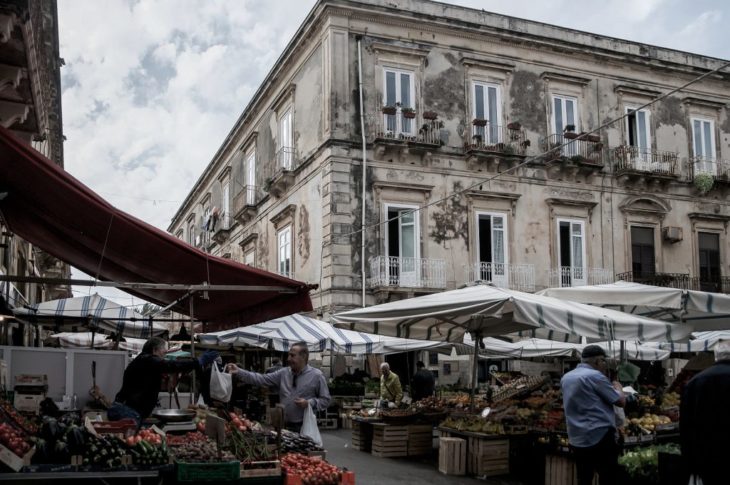 Inhabited since ancient times, the UNESCO-listed town of Syracuse – not to be confused with Syracuse, N.Y. – is Sicily at its eccentric best.

Linked to the mainland by two road bridges, the historic Baroque island of Ortygia is Syracuse’s most beautiful corner, where most of the historical sites are located. If you are an early riser, be up by 7:00 a.m. to visit the historic, bustling food market of Ortygia, filled with colorful stands and stalls selling local meats, seafood, and spices of all types.

Walk around the charming Centro Storico and let the aquamarine waters of the Ionian Sea hypnotize you. Don’t miss a chance to explore the Neapolis Archeological Park of Syracuse, home to spectacular Ancient Greek ruins. 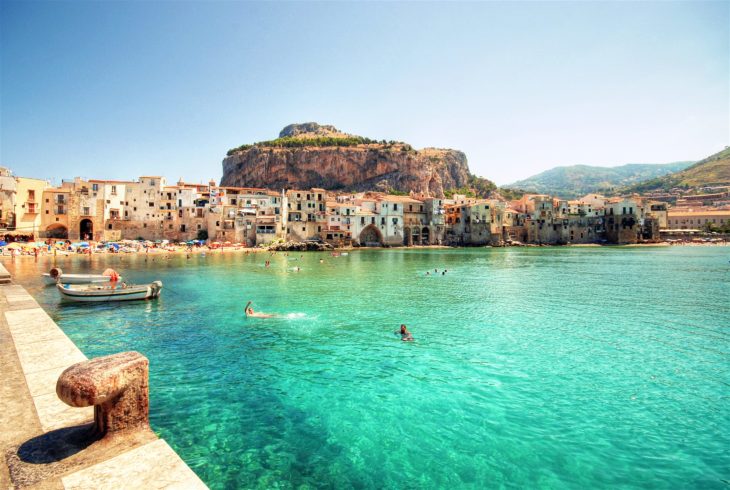 Are you visiting Sicily soon? Renting a holiday house is the way to go. Most luxury travelers actually prefer to opt for an alluring, self-catering villa rentals, to kind-of feel like they are living at home while away traveling.

There’s no shortage of private villas in Sicily to rent, from ultra-luxe hideaways to stunning countryside retreats in true Sicilian style, some of which are available to rent through Select Sicily, a luxury vacation-rental company based in Castelvetrano, in the province of Trapani. For more information, please visit www.selectsicilyvillas.com.