The Division 2 – These Are The Weapons To Get

The Division 2 has exotics that are some of the best weapons in the game, and it’s not even that hard to find them.
These weapons have a patchy golden color attached to them to distinguish their rarity, tier, and visual markings from the rest of the weapons in the game.

These weapons are intended to stand out from the rest of the crowd regardless if equipped or laying on the ground waiting for you pick them up.

The Division 2 exotics even have lore attached to them, which usually connects them to some of the in-game factions.
So without further ado, we’re going to give a list of the best weapons you can get in The Division 2 and how to get them.

Diamondback is a rifle that looks reptilian due to the snakeskin attached to it. This weapon is the newest in the game, so naturally, you would have to wait a few weeks before acquiring it. However, to get this gun, you would need to find all the crafting materials it needs. The materials used to craft Diamondback can be found if you compete in all three Expeditions. The tricky part is that the third and final expedition doesn’t open until August the 9th. 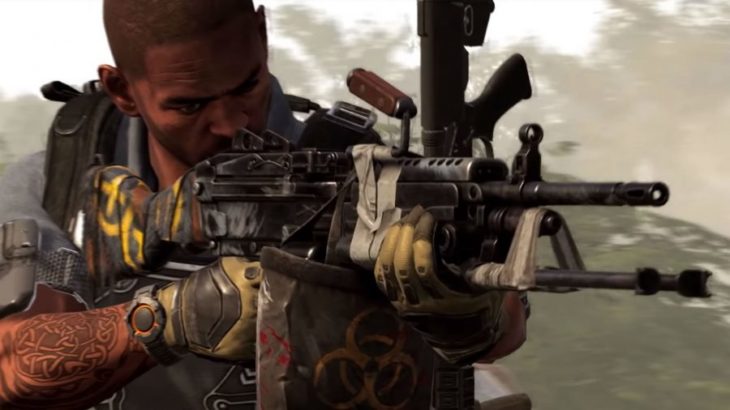 Pestilence is yet another exotic found in the Tidal Basin Stronghold. However, it takes a lot of grinding to acquire the Pestilence LMG. This weapon gives you a talent which inflicts enemies with the Plague of Outcasts if you manage to hit an enemy for 20 times. If the enemy dies while inflicted with The Plague of Outcasts, then it leaves a toxic smoke cloud for 10 seconds that deals 200% weapon damage per second to enemies in the area. Before we begin, click here if you want to browse the full list of Division 2 carry weapons that you can acquire to make your character even better.

Nemesis is an exotic sniper rifle that is native to the Black Tusk faction. This amazingly powerful sniper rifle is modified with a few attachments such as laser sight, suppressor, and a scope. Nemesis can be found in World Tier 5 and offers some amazing talents such as counter-sniper, preparation, and the nemesis talent that marks an opponent for 15 seconds every time you aim at him.

Sweet Dreams is a shotgun that is obtained without needing to purchase the Capital Defender pack. This shotgun boasts some amazing talents such as the sweet dreams talent which grants you 35% bonus armor for 5 seconds every time you melee an enemy unit with the shotgun, the sandman talent which debuffs enemies from using armor kits and healing, and the evasive talent which allows you to dodge 25% of enemy fire while reloading. Yet another exotic rifle, the Merciless looks like an AK but the talents make it so much more formidable. Some of the talents that come with Merciless include a binary trigger that fires on trigger pull and release, guerrilla warfare which places primer rounds every time you pull the trigger, and they detonate upon release, and brutality which has 5% chance to deal 20% damage as explosive damage whenever Merciless is holstered.

Back pain issues? Here is how you can solve those

Here are some of the craziest weapons from...

Forget about Cotton with these 5 Outstanding Bamboo...