The Soapbox: Why “Creep Shaming” Is Total BS

On Thursday night, I had what seemed like a pretty good first date. By Friday lunchtime, any chance of a romance between that guy and I had fallen spectacularly to pieces.

I wrote about what went down in a post called “An Open Letter To The Guy Who Called Me ‘Crazy.’”  I’ve been pretty thrilled by its reception, particularly all the messages from women who’ve said they totally relate to what happened with Mean Crazy Bitch Guy. However, something in the comment thread has caught my eye: a (new) commenter penned a lengthy comment insinuating Mean Crazy Bitch Guy was actually the victim in the entire scenario and that he lashed out and called me horrible names because he “[felt] creep shamed.”

“Creep shamed”? I thought. I know that term from somewhere. Where is it …? Oh, right, it’s a “men’s rights activist” term. But I wanted to know more.

So I did a little Googling. This post from a blog called Exposing Feminism, “The Catalogue Of Anti-Male Shaming Tactics,” is a pretty thorough list of the various “shaming tactics” that women supposedly use to abuse men, such as comments like “You make me feel afraid” or  “You’re are so immature!” If you are wary of ripping open your appendectomy stitches from all the laughter, another good, concise definition of “creep shaming” is this quote off of Reddit which makes the rounds on Tumblr in the feminist circles: 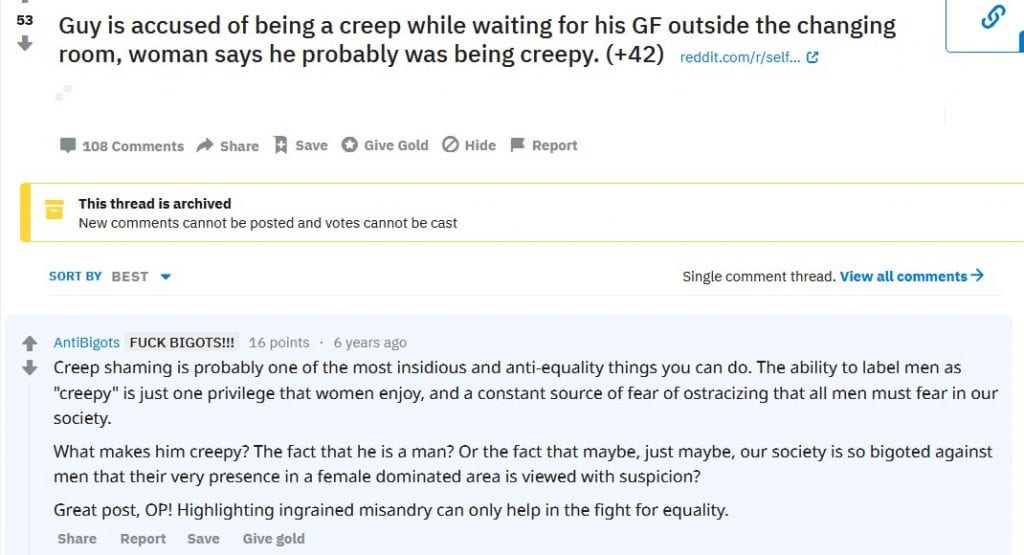 Creep shaming is probably one of the most insidious and anti-equality things you can do. The ability to label men as “creepy” is just one privilege that women enjoy and [is a] constant source of fear of ostracizing that all men must fear in our society.

Allow me to translate: “creep shaming” is a word, oft-employed by “men’s rights activists” and their sympathizers, as a way to make men the victims of women and their womanly, emotional, irrational craziness. At its core, claiming “creep shame” and their apparently “constant” fear of ostracism prevents men from being held accountable for their behavior.

(I feel as if it is worth noting, in the interest of being very, very clear, that the words “creep” or “creepy” were never used by me in reference to Mean Crazy Bitch Guy (MCBG). Anywhere. I’ve never verbally called him a creep, texted him that he was was creepy, or used either word in my post. For what it’s worth, I actually didn’t think he was “creepy” at all; I just thought he was a rude asshole for calling me names. So, to be very, very clear, we are discussing a commenter’s hypothetical assessment that MCBG  felt creep shamed, and not an actual verbalized accusation from me — that he was a creep — or from MCBG himself — that he felt creep shamed — at any point.)

Now, in fairness, “creep shame” can be a useful term to have, as feminist authors that I respect, such as Amanda Marcotte in this piece and Clarisse Thorn in this piece, have noted. The word “creep” and “creepy” are primarily used as gendered terms against men. It’s not hard to see why: Generally speaking, men are considered the “hunters” on the dating scene and therefore, as Marcotte notes, male sexuality can be “constructed” as predatory. Men want to be considered manly enough to hunt for women, but are wary of being branded as “creeps” or predators for doing doing. That’s problematic, as Thorn writes, because “The pressure put on men to be initiators, yet avoid seeming creepy or aggressive leads to an unpleasant double bind.” This double bind is absolutely one of the ways that sexism affects men.

To be sure, some guys get called creeps unfairly. (Say, the guy in your office who, when you are wearing an awesome outfit, says “Awesome outfit!” and gets reported to HR.) Also, some creeps are bonafide predators — the men in Lyneka Little’s essay on Monday, for example, who spiked her friends’ drinks come to mind. However, there are some men who are just plain clueless about their behavior and not even charmingly clueless like, say, Steve Urkel. These “creeps” are intentionally “clueless,” because despite being made aware by women of what is and isn’t OK, Marcotte writes, they’re refusing to change their own behavior:

Some creeps are openly predatory, and some fall more into the “clueless” category. (Though the problem is that men hide behind “clueless” in order to excuse being creepy.  When they whine that they Just Don’t Know, and women go out of their way to educate them, the response is going to be a tantrum 99 percent of the time.  They could change, but they don’t want to.  But they don’t want to be responsible for being creepy, so instead they just choose cluelessness as a strategy to avoid having to change.)

Could change but didn’t want to?  Hmm, sounds a lot like my request to MCBG that we take things more slowly — which resulted in him calling me mean, bitchy and crazy. And this next quote from Marcotte particularly struck a chord with me because it’s exactly why I suspect MCBG thought his douchey behavior was acceptable:

[“Creeps” aren’t] just too honest about their sexual desires; it’s that they have a really heightened sense of entitlement and they put that on women.

Entitlement. That, I think, is the problem here. “Creep shaming” implies the guy is being kept away from what he is rightfully entitled to because his behavior is being restricted by the woman. It makes whatever went down that resulted from her communicating with him/putting up some sort of boundary as her problem. Instead of him needing to do XYZ, she needs to stop doing ABC. One of the things you do in a relationship, whether it’s a first date or a 20-year marriage, is set expectations, which includes behavior. It’s a man’s responsibility to read her social cues, listen, and communicate. And his date/girlfriend/wife should be able to say “This is what I’m OK with … your move.”  But conveniently for men — actual creeps and non-creeps alike — they can hide behind this fear of the stigma of being “creep shamed” as a refusal to change his not-OK behaviors.

The reality is that sex and courtship are not a zero-sum game where there’s a winner and a loser. It’s not about one person getting everything they want and the other person getting nothing.  It’s a constant negotiation, a partnership in which everything gets figured out together. The way you figure things out together — stuff like who pays, how to proceed with sexual stuff — is by communicating about it. And it’s a really freaking dangerous idea to twist a woman’s open, honest communication about her boundaries/expectations into “creep shaming” that victimizes men.

My “An Open Letter To The Guy Who Called Me ‘Crazy’” wasn’t just a piece about a bad date. It was about getting shut down and silenced as “crazy,” “mean” and “bitchy” — some of the worst words that you can call a woman — for saying something that a guy didn’t like. Those words were used intentionally and were purposefully dismissive of me using my voice to try and set boundaries. I made a point to communicate my expectations clearly, in a respectful way. I have my reasons for wanting to take sexual stuff slowly, which I’d hoped he would respect. Unfortunately, it didn’t work out so hot. I thought MCGB was just a jerk, but apparently he has defenders out there in the universe who think he deserves our sympathy because me using my voice may have “creep shamed” him.

11 Reasons Why Dating An Older Man Is Awesome

The Soapbox: I’m Short, But That Doesn’t Mean...