If you happen to look at the Twitter right now, you will see that one of the top trending items is #CruzSexScandal. Why? Because according to the National Enquirer, Ted Cruz has cheated on his wife Heidi with five other women–including a “hooker” a teacher, and, oddly, Trump spokesperson Katrina Pierson.

Now, I’m not saying that the National Enquirer is entirely unreliable and wrong always. They got shit right in the OJ trial, and also, yes, sure, they broke John Edward’s affair with Rielle Hunter.

But there is one very important difference between John Edwards and Ted Cruz–and that is the fact that it is not entirely out of the realm of possibilities that someone would want to bang John Edwards.

I’m also not saying that Ted Cruz is so fabulously moral that he would never cheat on his wife with five women. I think he probably would, given the opportunity. 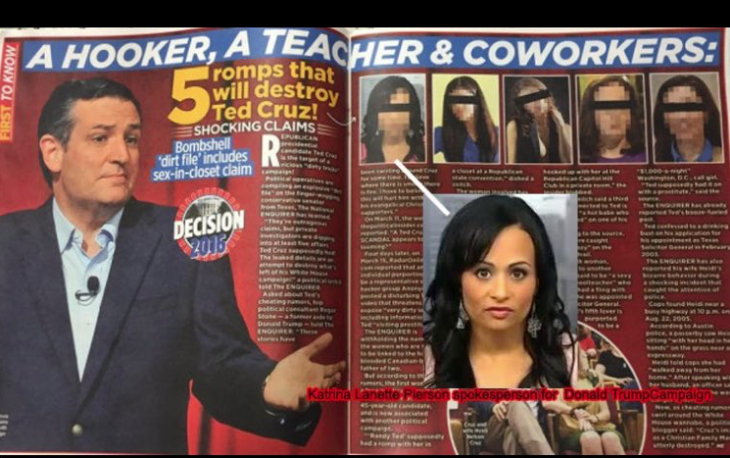 What I am saying is that there is just no goddamned way that five separate human women let him stick it in. There just isn’t! The man is walking vaginismus. He is the one of the rare cases in which, yes, the female body has mechanisms to just “shut that whole thing down.” One glance into his weird, tilted sneer-smile and a wall just comes down. I don’t even believe his own wife has had sex with him. I think they must have used IVF. Or maybe their children are robots. I don’t know.

And, I will tell you–this is not even a partisan bias–“creepy as fuck” is not necessarily a partisan characteristic. Yes, his politics are horrible and that is a good enough reason for sure to not ever fuck him–but his politics had nothing to do with the fact that he thought it was normal to walk around the women’s dorm at Harvard in a paisley robe, to the point where said women asked his roommate to make him stop because he was creeping them out.

Even if you were the sort of woman who was into his politics, if pressed, you would probably sound like Lindsey Graham trying to endorse him in the primary, all “Well, if it’s between him and Trump…” and then all of your insides would shudder, just thinking of that nasally voice whispering sexy talk in your ear. If there is a word for like, the opposite of sex appeal, that is what he has. He’s like the personification of the word moist.

If I’m wrong, I’m wrong. But I feel very sure that Ted Cruz is entirely unfuckable.