The Greenest Star in Hollywood is the Sun: Tinseltown Adopts Renewable Energy

Hollywood is known for its entertainment, movie stars, and wealthy lifestyles. However, it is also a hub of renewable energy.

Solar power isn’t a new concept in California. The earliest version of the technology has been around since the 1800s. The Public Utility Regulatory Policy Act (PURPA) was passed by Congress in 1978 and permitted independent power suppliers to connect with local distribution systems. This cleared the way for large-scale solar systems to come into use.

Today, development in Hollywood is booming, and with it comes an increase in solar energy systems. On August 4th, 2017, the Trump administration officially gave notice of its intention to withdraw from the Paris Agreement. In response, California moved forward with its own clean energy initiative.

The state created Senate Bill 100, which intends to reduce CO2 emissions by 60% of retail electric sales from renewable energy sources by 2030. The bill also outlines plans to transition to 100% renewable energy by 2045.

New efforts began to spring forth at the local level, pushing for sustainability as well as clean air and other measures that nurture healthy communities.

The City of West Hollywood implemented its 100% clean energy option on February 1st, 2019. The government-affiliated Clean Power Alliance (CPA) offered electric customers the choice of obtaining their supply from renewable sources like wind and solar.

West Hollywood Council member and CPA Legislative and Regulatory Chairperson Lindsey Horvath emphasized the importance of individual choice. “The Clean Power Alliance is all about returning decision-making to the communities. As the customer base grows, we will try to return energy savings to the people.”

Horvath also explained that while the decision to switch entirely to renewables wasn’t a unanimous one, it was “well supported.”

“West Hollywood always looks to progressive policies to protect our environment. We feel strongly that moving to clean energy is important for our survival.”

Customers’ service defaults to 100% renewable energy. They can opt-in to 50% or 36% renewable power, which costs less than the 100% supply. Epic is the name given to a newly constructed skyrise on Sunset Boulevard. The 13-story building is leased by streaming service Netflix. The company plans to occupy all 327,913 square feet of the structure. Move-in phases started last January with the lease extending until 2031.

The architecture firm Gensler came up with the plans for Epic. They worked in futuristic design with a focus on the building’s use as a creative space. There are approximately 25,000 square feet of communal outdoor space, electric car charging stations, and a drone landing pad.

More importantly, it’s equipped with several energy-saving features, like air conditioning that automatically powers down when doors open on outside decks.

The exterior is covered in blue-black windows. These aren’t just regular glass panes but tinted glass and photovoltaic cells.

“When you think about solar panels, you typically think of them on top of a roof. But on a commercial office building, your roof is used for all these other means of construction, including your mechanical equipment,” he said.

“So, we tried to get very creative because we really wanted to integrate solar panels into the project. And we did it by putting it into the façade, which is very unique, hasn’t been done in the city of L.A. before. And we’re really happy with the results.”

Building-integrated photovoltaics are still a rarity. Epic’s design is a first of its kind in Los Angeles.

The skyrise will generate a mere 1.5% of the energy Netflix will need to operate there. While that’s a small quantity, it’s a big step in the right direction, according to Barton. “Bringing this technology is not a moneymaker for commercial developers.”

He went on to state that despite the limited financial return, “we just felt like it was the right thing to do.” 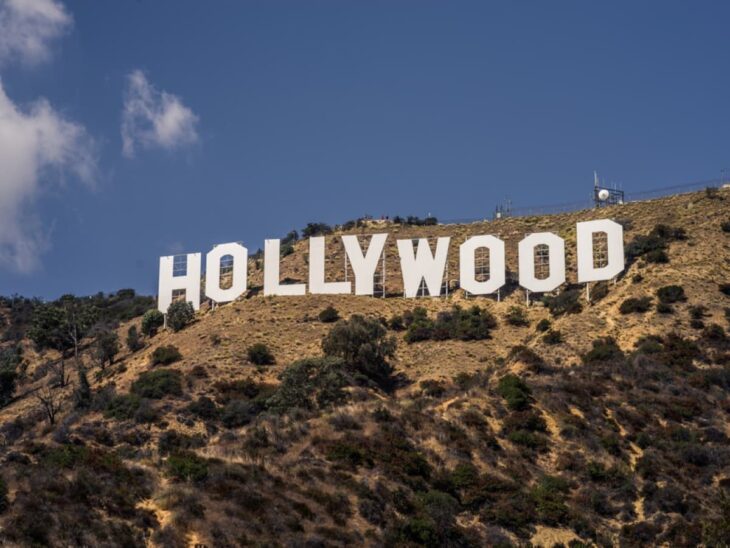 Solar Neighbors is a community program that spreads awareness of solar energy and helps low-income families adopt solar to reduce their electric bills.

Pitt encourages the construction of eco-friendly homes and founded the Make It Right Foundation in 2007. Make It Right was established to assist in the reconstruction of New Orleans’ Lower 9th Ward after Hurricane Katrina. The program wants to rebuild safe structures for people in need that are energy efficient using sustainable methods.

Former James Bond movie star Pierce Brosnan also has an interest in green living. He installed solar panels on his Malibu villa and was inducted into the National Environmental Hall of Fame.

Ed Begley, Jr. has appeared in hundreds of films including Best in Show, Batman Forever, and Pineapple Express. He also takes environmental issues very seriously. His home uses wind and solar power. He’s known for using a bicycle to generate energy to run his toaster. He has an annual electric bill of around $300 thanks to his power-saving efforts.

Begley was part of the reality television show Living with Ed, which originally aired on HGTV in 2007. Today, it can be watched on the Planet Green channel. The series follows Begley in his journey to shrink his carbon footprint.

Solar Energy is More Accessible Than Ever Before

Solar energy is more accessible than ever before. Experts like those at Connect Electric can help you find solutions that meet your needs. While many wealthy Hollywood personalities have joined the green movement, you don’t have to be rich to make positive changes. The first step is to learn more about renewable energy and sustainability to find out how you can incorporate these technologies into your lifestyle.

6 Reasons Your Room Should Have a Ceiling Fan