I recently crossed something off my bucket list. At 29-almost-30, I finally learned how to surf. Despite growing up in sunny San Diego, I’d never learned, and after a failed attempt to teach myself in Hawaii as a teenager — resulting in bloody knees and feet after a detour through a coral reef — I never tried again. Until this summer.

The ocean is a powerful force and surfing requires respecting that power and also figuring out how to harmonize with it. I’m certainly no expert, but I felt like there were a few times when I was out there, on my board, and Mother Nature and I were grasping hands.

It had been a while since I’d had a vacation and this was my first substantial solo mission ever. As part of a couple, my ex and I always traveled for pleasure together. Before him, I went on the occasional jaunt to Europe with friends, and before then my travel companions were my parents. For this much-anticipated vacation, I wanted to travel alone, but I was nervous about it, to the point where I procrastinated on making plans for months.

What if I get bored? What if I get lonely? What if loneliness turns to depression? Do they have shrinks abroad? These were all questions that ran through my brain. That’s why I eventually settled on surf camp, and the desire to surf led me to Costa Rica.

I found Pura Vida Adventures the old-fashioned way. I Googled “costa rica surf yoga” and it was the first result. As someone who works on the web, this impressed me. Clearly this company was being smart about their search engine optimization! Another thing caught my eye. Pura Vida Adventures caters specifically to women — though they do offer co-ed retreats — and steering clear of male distraction was one of my vacation prerequisites. The founder’s mission statement, in which Tierza Davis describes what brought her to Malpais, Costa Rica, particularly spoke to me:

“My first trip to Malpais, Costa Rica was intended to be a week-long getaway with friends. Five months later, still in Malpais, I realized that the power of this little corner of the world affected my outlook on life. The Costa Rican locals use the phrase “pura vida” to mean “life is good” and translated it means “pure life”. The beauty of the coast, the kindness of the locals, the spirit of fellow travelers, and the mystical effect of surfing taught me the meaning of “pura vida”. I have started this business to share this experience with other women like myself. Traveling. The ocean. New cultures. Relaxation. To me, that is pure life.” 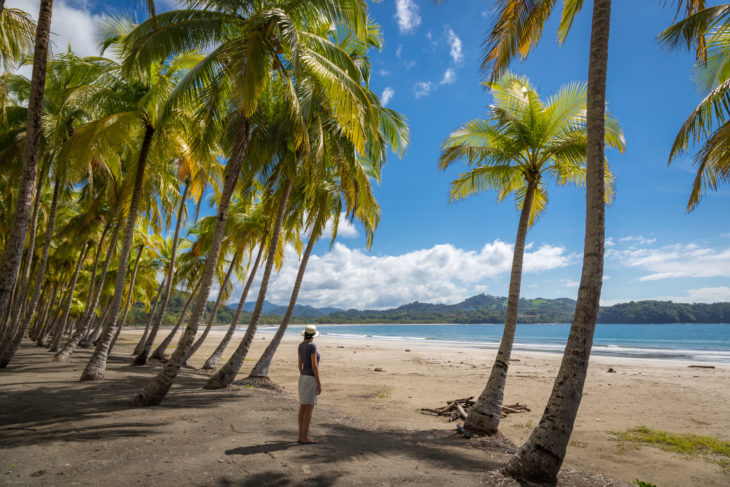 This statement embodied everything I wanted in my vacation experience. I wanted to face my fear of failure (at surfing), push myself physically, learn and experience something new and different from what I know at home, and hopefully bring some of those lessons back with me. Most of all, I wanted to have a good time. After finding Pura Vida through that one Google attempt, I didn’t do any additional research. I booked my flights right away. Given all the procrastinating I had done on planning my vacation initially, it was as if Costa Rica made the decision for me.

To get to Malpais, you’ve got to fly to San Jose, take another flight to Tambor, then drive about 45 minutes towards the ocean. Malpais is on the Pacific coast of Costa Rica and is so gorgeous that Gisele Bundchen owns a huge house there, with rooms for all her gorgeous sisters to bunk in. Pura Vida operates out of a beach-side hotel and usually puts up most of their visitors in a two-story house on the complex that’s only a few yards from the ocean. On my trip, I opted for my own room, but shared a bath with a fellow traveler named Jenny*. (The rest of the “hotel rooms” are individual bungalows dotting the many pathways down to the beach.) We had a huge deck outside our room from which we could see (and hear!) the ocean. 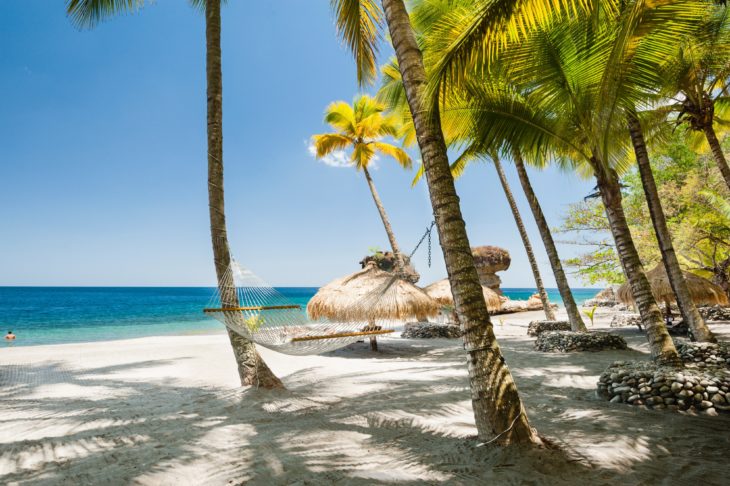 I got lucky — there were only four other women doing the surf camp the week I was in Malpais, which meant we all ended up receiving a lot of private tutelage from our two surf instructors. But best of all, three of the women on the trip were amazing people, women I likely would have never met in my regular everyday life. Jenny was in the room next to mine and is a married mom with two young daughters; she has a cheerful and warm vibe about her that made us instantly click. The fact that we shared a bathroom — including a toilet that you weren’t allowed to flush toilet paper in (you had to deposit it in the waste basket — yes, even the pooey ones) — helped to secure the bond.

Kasey* is in her mid-30s and single, the owner of her own PR agency in California. She was urban and funny, self-deprecating and incredibly friendly. And Candace* is in her ’30s as well; she works as a lawyer, is married, and has a toddler. She was one of those people who was relatively quiet, but when she had something to say, you knew to listen because what she communicated was really worth hearing.

Our two female instructors were equally as amazing. Both Benny and Nicqui, like a lot of the people who live in Malpais, were the kind of people who went wherever the tide took them and had lived all over the world before the age of 30. I’ve worked non-stop since graduating from college and haven’t traveled extensively — my brain is always somewhat focused on the next six months, year, five years, ten years, etc. Sometimes it’s a struggle to live in the moment. I came to really admire and even envy the way both Benny and Nicqui were extremely responsible and hard-working but not blindly tied to any form of materialism or end-all-be-all plan. They seemed to understand that life is full of surprises, that you never know where you might end up, and that embracing change is the key to enjoying life — something that I think a lot of westerners have a hard time doing. I know I do.

The retreat was surf-focused, but each morning we did an hour of yoga that focused on working the muscles that we would be using out in the water — which is to say, muscles that we had no idea we had and muscles we had never used before. Our teacher had that insanely gorgeous makeup-less glow that really truly should be marketed as an added benefit of a regular yoga practice. I think all of us had a serious girl crush on her. 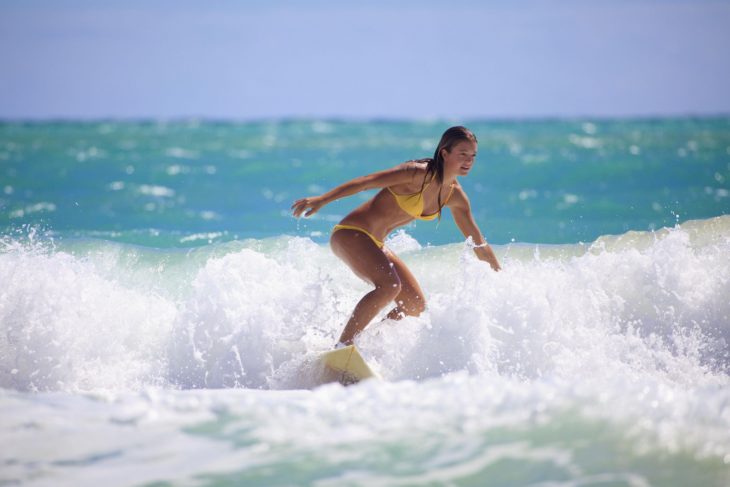 Ahh, but surfing. That was my real crush. It was everything I hoped it would be, and more. It was f**king hard. I’m a strong swimmer in the ocean, but I’m used to diving under waves. When you’re toting a 9-foot surfboard you just have to get pummeled by the waves, which can be exhausting. Standing up is a struggle — pushing myself up to a standing position from lying down in a matter of seconds without using my knees (and oh, did I use them) was my biggest barrier. But on that first day, thanks to the encouragement of Benny and Nicqui, and the other women in the water with me, I did get up, and continued to get up, intermittently, for the rest of the week. Staying up, well that’s another matter.

It would be impossible for me to explain how I learned to surf, but I can explain how it felt. I’m not a very physically active person. I mean, I do yoga sometimes and I ride my bike, but fitness is not a passion of mine, at all. Surfing, while insanely good for your physical body, was about as spiritual experience as exercise can be.

The ocean is a powerful force and surfing requires respecting that power and also figuring out how to harmonize with it. I’m certainly no expert, but I felt like there were a few times when I was out there, on my board, and Mother Nature and I were grasping hands.

I pushed myself to keep at it, despite the ongoing frustrations, never feeling the urge to give up, as I might do when I’m at the gym and getting tired of running on the treadmill.

By the end of the trip, after getting to know the women better, it was clear that we all were on some sort of personal journey. I went to Costa Rica to get away from the sadness of my breakup, to have time to think about what I wanted for my life going forward, without the distraction of work. I wanted to challenge myself physically the way I had been challenged emotionally.

Jenny was on her first vacation since having two kids. She was finally giving herself some much needed time away to focus on herself, a notion that she seemed to feel some guilt about. She wanted to rediscover who she was outside of being a mom and a wife — and it turned out that one thing she definitely was was a natural surfer. She’s since gone home and continued to surf and practice yoga regularly. 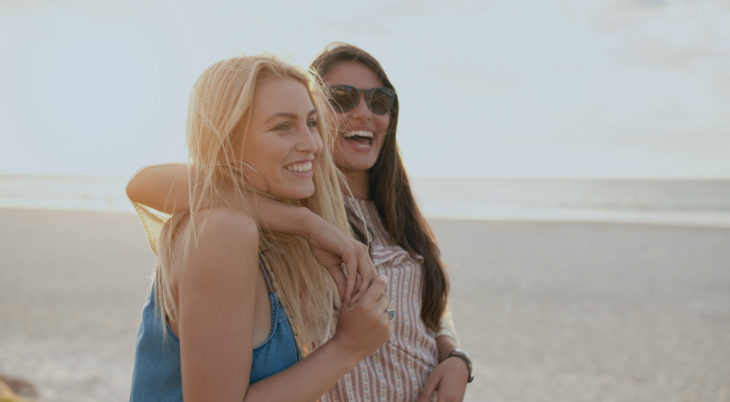 Candace had come to Costa Rica to learn to surf, yes, but also to make a final decision as to whether she was going to end her marriage. She had her good days and bad days emotionally, but, like Jenny, she was a total natural in the water. Kasey was a complete rock star in every area of her life back home — she started her own successful company! — but really struggled in the water. Wrestling with failure was her struggle to face.

The greatest thing I got out of going to Costa Rica with Pura Vida Surf Adventures was, yes, learning to surf, but also it was the collective experience of everyone trying and cheering each other on. It made me profoundly grateful that my life had turned out the way it had and that not knowing how it would eventually end up was an incredible adventure and gift too.

Using Online Therapy to Stay Fit During the...