7 Sort-Of Rules For Living (And Being Okay) With Anxiety

Do you have anxiety? You’re in good company. According to the National Institute of Mental Health, there’s around 40 million people dealing with anxiety disorders in the U.S. alone. That’s a lot of friggin’ people — and I happen to be one of them.

Anxiety is something I live with and manage every day of my life. Most of the time, because I’ve figured out how to manage it in a way that makes sense for me, living on the anxiety spectrum makes me a sensitive, thoughtful and occasionally high-strung person. Sometimes it can really suck, but it’s my reality, so c’est la vie or something. I first developed anxiety when I was graduating from college, which I imagine is fairly typical. You’re birthing yourself into the Real And Terrifying World and there’s so much to think about. My anxiety manifested as insomnia, but, like, a particular kind of insomnia. Every time I would be on the verge of falling asleep, I’d have anxiety about falling asleep, which would wake me up. Awful. That went on for three months before I finally said fuck it and went to student health, where I was diagnosed as having an anxiety disorder. Whoops! 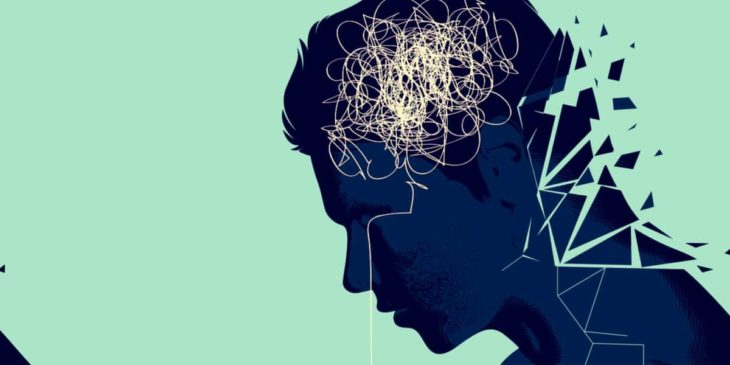 Yes, anxiety is a psychological thing. But for a lot of us, anxiety isn’t just a mental, it’s got a shitty physical component as well. In Jeffrey Eugenides’ The Marriage Plot, Leonard (who is basically a stand in for David Foster Wallace) describes depression as a feedback loop between the body and mind:

I think of anxiety as a similar terrible feedback loop. Your brain is racing, so your body starts racing, and your brain continues to race because your body is reinforcing the signal of anxiety your brain is sending out. I’m not a doctor, obvs, but I am someone who’s been living with pretty major anxiety for the last, oh, half of my life. But there are things you can do to make it easier on yourself. Here’s what works for me.

1. Let yourself feel the feelings. Guilt is the wicked bitchy stepsister of anxiety. You feel bad about how you feel which in turn makes you feel more anxious. It’s a crappy cycle. If it helps, give yourself a mantra, something along these lines of “I’m feeling really anxious right now but that’s okay. I know I won’t always feel this way.” Because it’s true. Understanding that feelings are temporal can help put them in perspective, calm you down and let you get on with the biz.com of living. 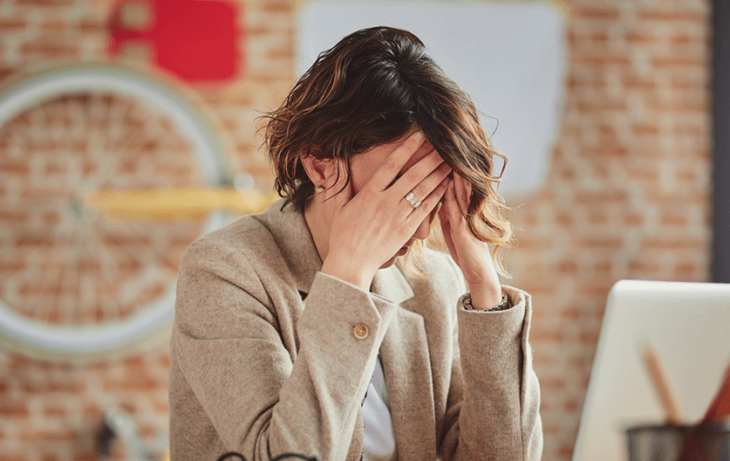 2. Learn how to change the messages you’re sending yourself. This is not a simple thing, and it may require doing some homework. It’s not easy to interrupt the negative, anxiety-ridden circle of doom you’ve gotten yourself into, but it is possible to make incremental changes in the right direction. When I was going through Crappiest Break Up Ever (™), I was recommended the book Feeling Good by Dr. David D. Burns. Burns is basically a huge proponent of what’s called cognitive behavioral therapy, which treats psychological issues by changing the cognitive processes you use to address them. There are a lot of points that Burns gets into in Feeling Good and its companion, The Feeling Good Workbook (highly recommend!), but it basically boils down to identifying and altering the negative thought patterns that keep you in a poopy holding pattern. Like, quick tip: Stop telling yourself that things are “always” or “never” a particular way. That kind of language is negative, disempowering messaging designed to make you feel hopeless. You are not hopeless!

3. Don’t feel guilty if you need medication. Sleep, diet, therapy and exercise have a profound affect on mental health and it’s always good to keep those things in check. But! For many of us, those things are aren’t enough. People will tell you that you should be able to control your depression or anxiety by eating better or exercising more, that you shouldn’t have to take medication because you should be able to fix yourself. This is bullshit.

I’m not advocating that everybody run out and get themselves a ‘script for Celexa, because yes, a lot of people do get huge results from a non-pharmaceutical approach. But if you are not one of those people, and if you (like me!) require anti-anxiety medications to be a happy, functioning person, there’s no reason to be ashamed of it. And here’s why: Everybody’s baseline is different. And plus, science! According to the NIMH, “Scientists currently think that, like heart disease and type 1 diabetes, mental illnesses are complex and probably result from a combination of genetic, environmental, psychological, and developmental factors.” This shit is complex. There is not one universal treatment plan that works for everyone. You’re you! You’re special! So concentrate on figuring out what make you feel good. 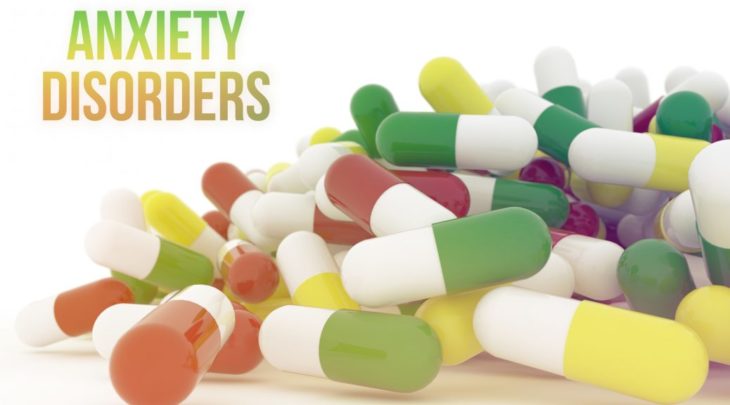 4. But don’t just use medication. People have a lot of feelings about this stuff, but I’m firmly on the side of people shouldn’t be taking medication without also exploring their issues via therapy. At least at first. Again, I’m no Jane Seymour, Dr. Quinn Medicine Woman, but it’s important to address the emotional stuff that may exacerbate whatever brain chemistry issues you might have.

5. Know your limits and don’t be afraid to enforce them. My anxiety began as a sleep-related anxiety, but then morphed into social anxiety, which is ironic, because its onset coincided with when I got an assignment to write a nightlife column for my local paper. It is extremely difficult to successfully do that sort of thing when social interaction makes you totally nervous and weird. I had anxiety about going out. I had anxiety about not going out and missing something. Anxiety! This is when I learned something really important: It’s okay to say no. It’s okay to decide you’re going to go home, or skip the party if it’s what is going to make you feel better. It’s okay to walk away from situations that heighten your anxiety and make you feel bad. And generally? There is always going to be another party/happy hour/reading you can go to when you’re feeling on top of things.

6. Stop and breathe. Yup, it’s pretty simple, but concentrating on your breathing sends your body a message to calm the fuck down. Learning to clear your brain and be present with your breath is useful in all sorts of situations — whether you’re feeling explosively angry, anxious or overwhelmed. 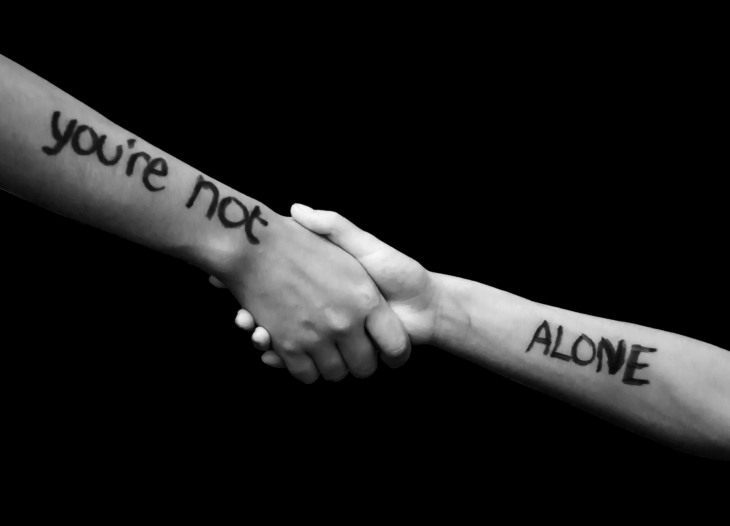 7. Know that you are not alone. Look around you. Chances are, half the people the people at your office, or coffee shop, or favorite drive-thru taco place are somewhere on the anxiety or depression spectrum. There is a stupid stigma around mental health stuff, and nobody talks about it (which is partly why I try and talk about it with everyone and anyone I know, like, all the time). Having anxiety or depression is nothing to be ashamed of. It doesn’t mean you’re a bad person, or a weak person, or somehow insufficient. It just means that your brain functions in a different way that may require some managing. Anxiety and depression are not value judgements on your worth as a human being. Don’t accept other people’s pathologies or antiquated ideas about what it means to have anxiety or depression. Your mental health is worth more than that.