Does Meghan Markle Plan To Use The Same Birthing Technique Like Kate Middleton?

Prince Harry and Meghan Markle will soon welcome their first child together, and Markle probably has already made her birth plan. It has been rumored that she asked Kate Middleton for advice about giving birth. Will Duchess of Sussex use the same birthing technique like the Duchess of Cambridge? What are the details of her birth plan? Keep on reading to find out.

Meghan Markle is due in April according to some sources. Since it is just two months away, she probably considered where and how she might deliver her and Harry’s baby. Her birth plan includes using the same birthing technique her sister-in-law used when she gave birth to all three of her children. The technique is called HypnoBirthing and it is a technique that is contained of specified breathing practice, meditation, relaxation, and visualization. Markle has allegedly been informed about the technique and finds it good.

It Is Very Likely That Baby Sussex Won’t Be Delivered At The St. Mary’s Hospital Lindo Wing

Prince Harry and Meghan Markle live in Windsor, Frogmore Cottage, so they think Markle should deliver their first child closer to their new home, instead of London. The Princess Margaret Hospital will probably be their choice, since it is a six-minute drive from Windsor Castle. According to the tradition, the royal children were born in London, but this break from tradition isn’t considered to be something horrible. Another option about the place Markle might give birth at, is their home.

Today The Duchess of Sussex made her first visit to @TheMayhew since becoming Patron – Mayhew is a grassroots charity working in a unique way to improve the lives of animals and people to better communities both in London and internationally. Mayhew looks for innovative ways to reduce the number of animals in need through pro-active community and educational initiatives and preventative veterinary care. Among the people she met was Wully, a formerly homeless pet refuge service user, and his two dogs Azzy and Gallis – The Duchess found out about the different ways Mayhew’s animal welfare officers have supported Wully and his pets over the past 11 years. Her Royal Highness also met Roobarb the dog, who is part of Mayhew’s dog therapy programme TheraPaws, which puts smiles on the faces of vulnerable individuals. The Duchess met volunteers who dedicate their time to Mayhew community programmes, including the trap, neuter and return programme, which controls and cares for the feral cat communities in London. And Her Royal Highness was also able to meet the team behind Mayhew’s international work, which includes an overseas vet training programme in countries like India and Afghanistan to help improve animal welfare.

It is not a common thing for royal mothers to hire a trained woman to help them during childbirth and who may provide support to the family after the baby is born, but Markle did that. She will have help during pregnancy, labor, and the postpartum transition from a doula, and she is the first royal mother to do so. Her doula is already helping the couple to prepare for the arrival of their firstborn.

A source close to the Duchess explained Us Weekly why Markle hired doula: „Meghan is focused on calm and positive energy around the birth — she’s a big believer in that.“ 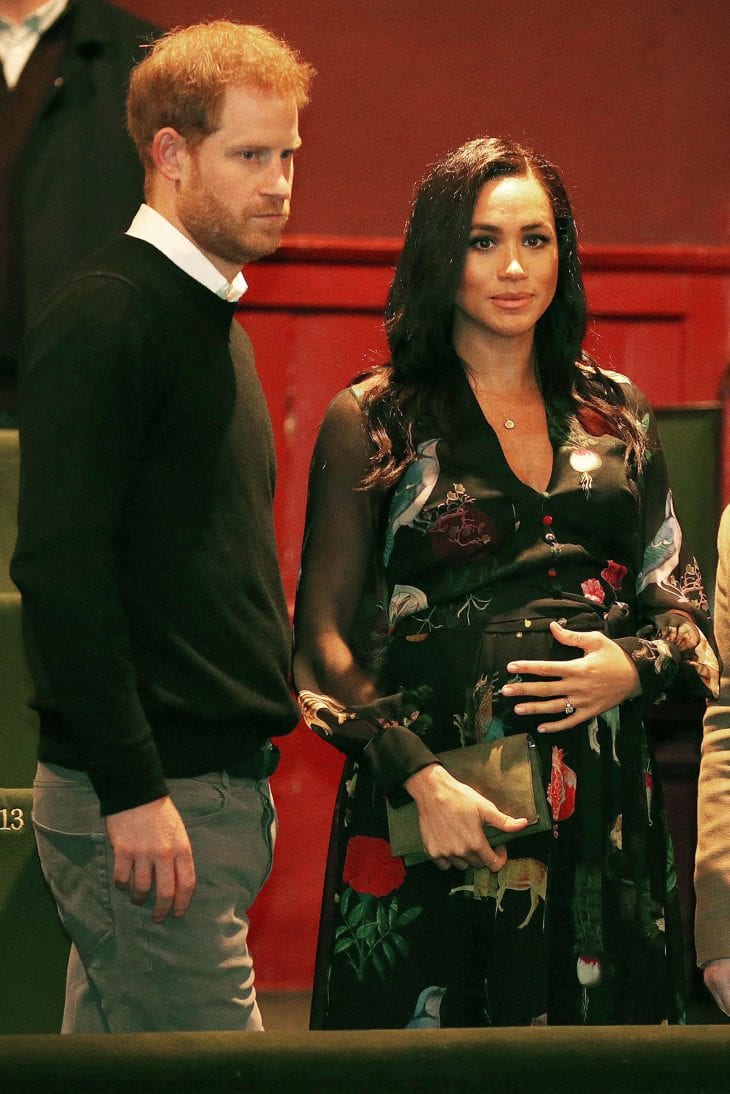 Britain’s Meghan, Duchess of Sussex (R) and Britain’s Prince Harry, Duke of Sussex, reacts as they visit Bristol Old Vic Theatre in Bristol, south-west England on February 1, 2019. – Built in 1766 as a place where the people of Bristol could come together, Bristol Old Vic is the oldest continuously working theatre in the English speaking world. (Photo by MARC GIDDINGS / various sources / AFP) (Photo credit should read MARC GIDDINGS/AFP/Getty Images)

Next to a doula, Markle allegedly hired a celebrity acupuncturist.

The source also said: „It’s brilliant for the blood circulation and boosting blood flow to the uterus. She plans to use acupuncture right up to her due date.“

Markle wants to be relax before baby, and Ross Barr with help her with the prep for delivery.

Prince Harry and Meghan Markle’s new home has a special room for Markle’s mother, Doria Ragland. Ragland plans on an extended stay with the couple after the baby is born. She will help Harry and Meghan with their firstborn. It has been rumored that once the Duchess is cleared for exercise, Ragland might even help her with her yoga practice.

The Benefits of Regular Roofing Maintenance in Coventry

Why you Need FR Clothing?