by The Frisky February 11, 2011
I saw this photo, and I was like, “Man, I feel really bad for this Brenda chick.” When I look at something like this, I wonder what the back story is. Let’s say the guy’s name is Elron. And he lives in Michiana. And he went to high school with Brenda, but he only admired her from afar, because she was sort of popular in a nerdy kind of way, and he was one of those guys who hung out behind the gym smoking cigarettes, looking angry and kicking at the dirt. 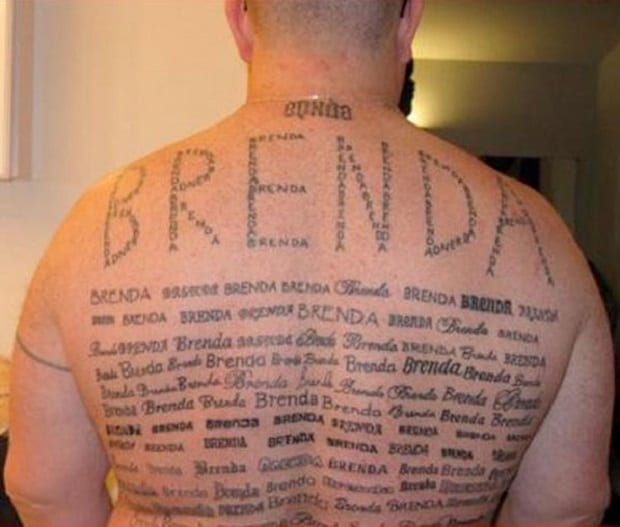 One time, Brenda glanced at him, but that was it. Then, 15 years later, he was on this dating site, and he looked through what must have been 2,679 dating profiles — until, one day, he came across a special one. He clicked on it. It was Brenda. The Brenda. The love of his whole damn life. So, he sat down, and he wrote her a 5,349-word email, proclaiming his love for her, that he would die for her, that he would tattoo her name all over his body, if only she would respond and agree to marry him. He was so sure that she would respond in the affirmative that he got her name tattooed on his back, like, 100 times. When he got back home, he found out that she had blocked his profile. After that, the rest of his life pretty much sucked. That is, until, one day, he met another woman, and, get this, it turned out her name was Brenda, too, and they got married, and had kids, and everything worked out in the end.

Women Are Masochists When It Comes To Love