Earlier this week, I read a story about a 52-year-old Mexican man named Roberto Esquivel Cabrera, who claims he has a 19-inch penis, which, if verified to be true, would make it the largest record penis in the world–significantly larger than the current record holder, Jonah Falcon, whose penis is 9 inches soft and 13.5 inches hard.

Penis extenders are becoming increasingly popular thanks to the growing adult media industry. Here is a list of best-selling extenders.

I chose to ignore this story because I happen to believe that 19-inches is not the length of the largest penis in the world. That honor belongs to a guy named TC, who has a 22-inch cock. 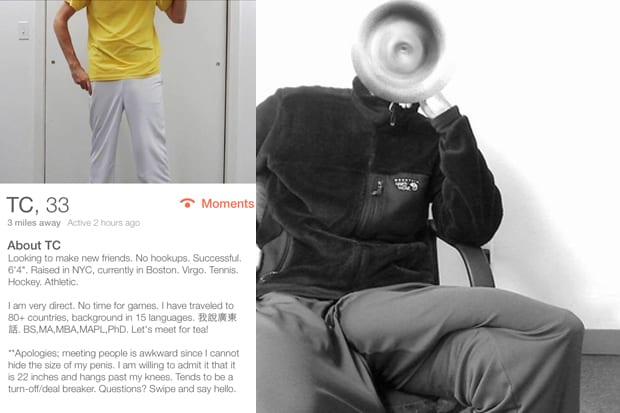 I wrote about him earlier this year after a friend came across his profile on Tinder, and he and I exchanged a few emails, with him swearing up and down that his 22-inch dick is the real deal, the result of a medical condition he had as a kid. I tend to believe people when they tell me things, especially when they use medical words I don’t understand, so I frankly was not all that impressed with Cabrera’s alleged 19-inch dong, though I was tempted to email TC to ask him if he really wanted to let this guy steal the fame that is rightfully he is. I still may do that. (TC if you happen to be reading this, let’s Skype! The spotlight could still be yours!!!)

But first! I suddenly feel like I can’t avoid writing about Cabrera’s cock, as there is now video. TMZ has this exclusive look at Carbrera’s wang – which has been made slightly less NSFW with what appears to be the leg of a woman’s pantyhose – and all the things he can do with it for funzies. Like licking the tip! And weighing it! (It’s two fucking pounds of alleged man meat BTW.) Bonking it on the head with his other head! Watch it above, but be aware it’s NSFW.

Now, I’m sure that some of y’all are going to be bubbled bursting and decry this guy’s junk as, well, bunk. But you were wrong about the woman with the cat hair in her vagina, weren’t you?! Maybe it’s time you guys listened to me about crazy-sounding genitals – I think I have proven myself to have a good gut instinct about these things. And the conclusion I have come to is that while Cabrera’s penis is impressive, it is not the biggest in the world. And dammit, someday I will find a way to prove it, even just to myself via Skype.

Joy Behar Explains Why She Married Boyfriend Of 29 Years