These female celebrities have reached an extraordinary level of success, which most of us can only dream of. But how do they celebrate all this success? Well, obviously not in an ordinary way. Hence, these celebrities go for rides, which some can’t even imagine owning in their wildest dreams. With their bank account balance looking like a phone number, these female stars can get their hands on anything that they dream of. Some not only buy their dream rides but also splurge a hefty amount to customize it according to their taste and style. While some go for the classic stuff, some add that extra bing to their rides. So let’s have a look at what our favorite female celebs drive to take some inspiration. 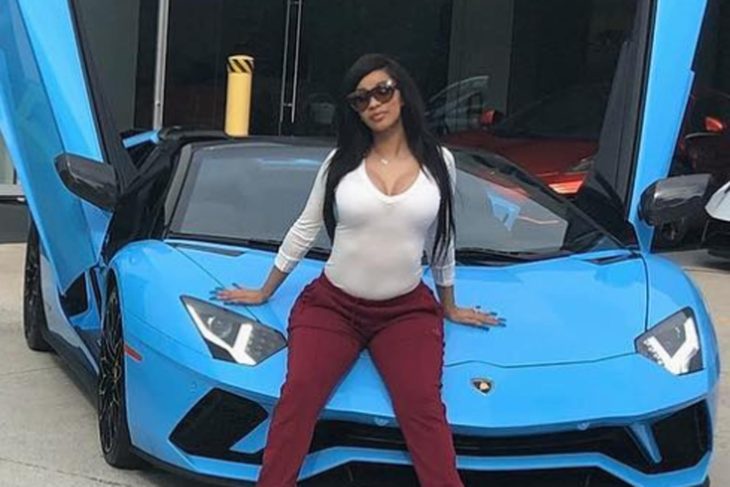 What do you when you are a successful rapper with a net worth of $8 million but don’t have a license? Well, you still go out and buy exotic cars for that flex! Cardi B is a proud owner of a Lamborghini Urus ($200,000), but she does not have a driver’s license. How many owners of a Lamborghini can you find who doesn’t even have a license? 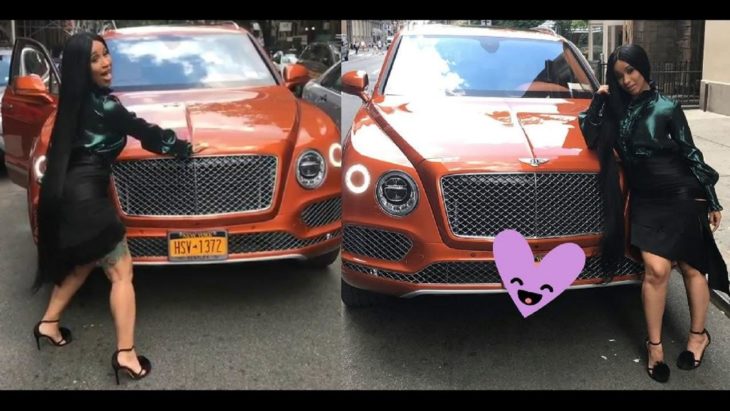 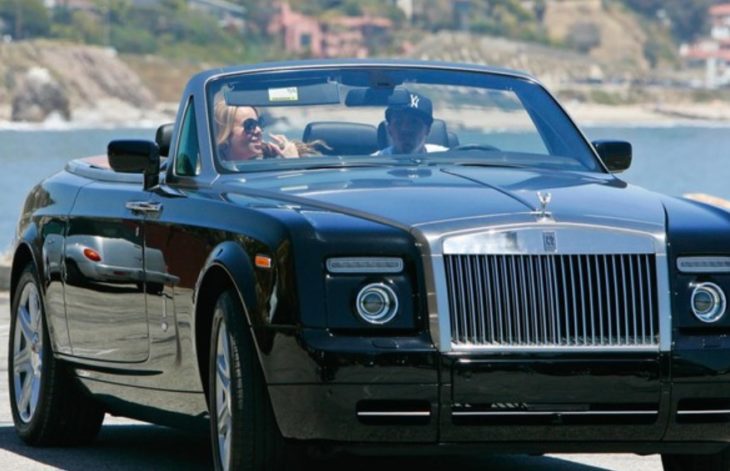 Mariah Carey is known for her extravagant lifestyle and likes to treat herself more than the others when it comes to exotic cars. With Mariah Carey’s net worth of $300 million, her excessive spending habits can be seen from her car collection, which has vehicles like the Porsche Cayenne and Mercedes-Benz SLK on the list. The SLK starts at around $42,500 and goes up to $82,200. It has a 5.4 DOHC V8 engine, which churns out 451 hp of power.

As she is used to traveling in private jets, she also owns a Maybach 62 ($400,000), which ensures that she gets the private jet treatment even on the road. Apart from the cars she purchased herself, her garage houses a particular car that is close to her heart. It is the Rolls Royce Phantom Drophead Coupe ($490,000), gifted by none other than her husband, Nick Cannon. Now, that’s exactly what a five-time Grammy award winner deserves after all. With a vocal chord and body insurance worth $70 million, we are sure she must be spending millions in maintaining these exotic cars as well. 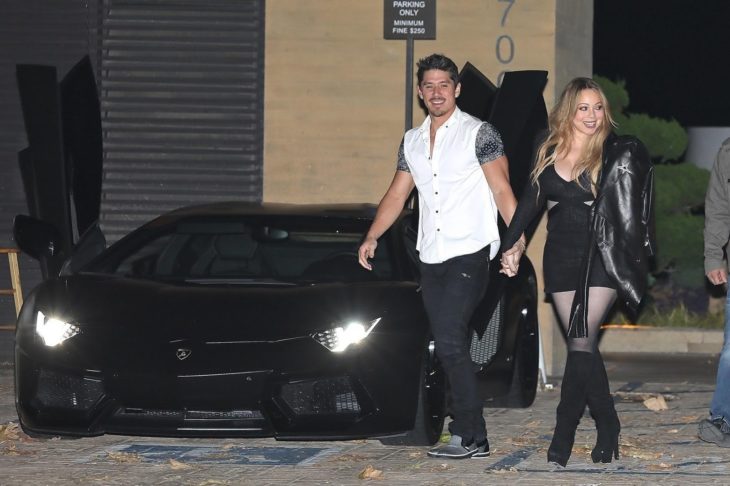 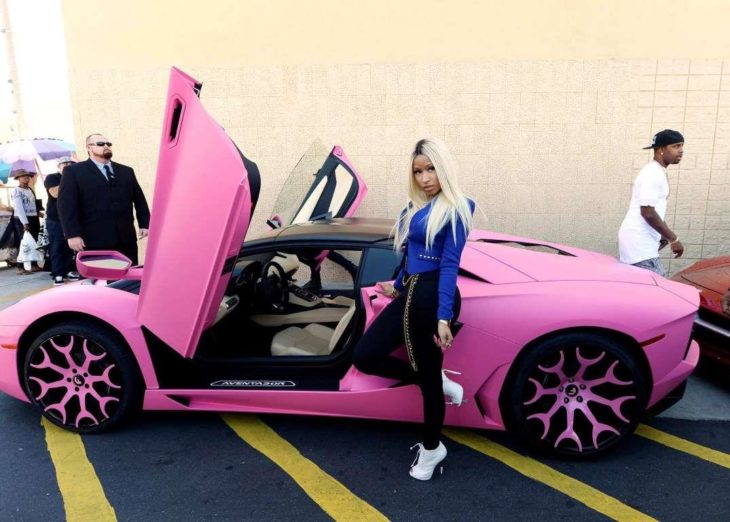 Nicki Minaj’s net worth stands at $85 Million. All three of her studio albums titles have the word “pink” in them. Hence you might wonder if her favorite color is pink or not? Well, it is not difficult to understand Nicki’s love for pink after seeing her all set to fire up in her matte-pink-wrapped Lamborghini Aventador Roadster ($460,247). Nicki surely loves to be extra as she has a custom-built this car according to her taste and style. She has got Forgiato wheels on for this Lambo, and the whole car has got a pink paint job treatment in a way that you won’t mistake her Lamborghini for someone else’s if you get lucky enough to spot one.

This year she also purchased a Rolls Royce Cullinan to add more of that bling to her garage. Cullinan’s base price starts at $380,000, and she has splurged out more to customize it. The refrigerator meant to chill her champagne alone costs around $7000. If you ever stepped into her garage, you will find a collection of her exotic car brands like Mercedes, Range Rover, and Bentley. Her car collection surely justifies her 4th rank in Forbes Hip-hop cash king’s list. 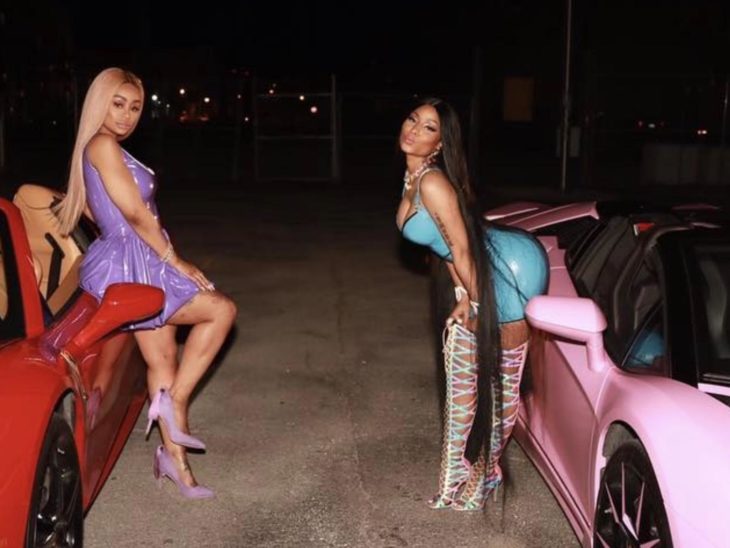 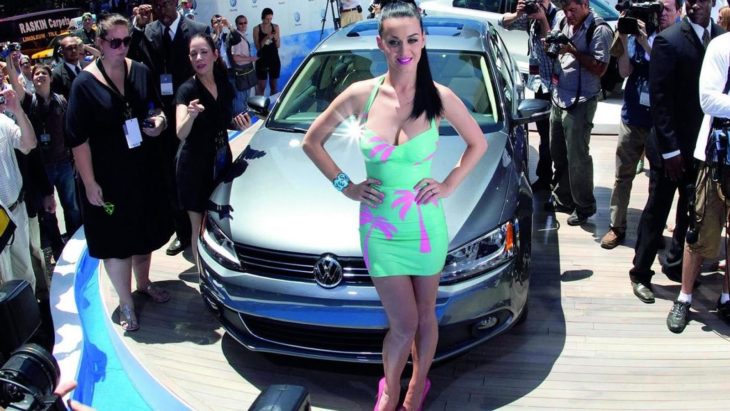 Katy Perry’s net worth is $330 million, and she believes in giving more than taking. Hence, in 2014, she gifted 5 of her assistants a Fisker Karmas worth $100,000. If you haven’t heard of Fisker Karma, they are all-electric luxury sport sedans made by Fisker Automotive (Justin Bieber has one, all covered in chrome).

If you ever get to visit the garage of her luxury $17.995 million Beverly Hills mansion, you will find the most expensive car she owns, the Maserati Grancabrio ($355,000). It has a V8 engine delivering 460 PS and a top speed of 180 mph. Alongside this, she also owns a Tesla Model S ($75,000) and Ferrari, California ($202,723). This clearly shows that Katy Perry doesn’t flaunt her success only through her shoe collection. When it comes to cars, she likes being eco-friendly. She has been adding electric vehicles to her fleet with cars such as the Tesla Model S and the Smart Car. Hence, expect to see more electric cars in her garage in the coming years. 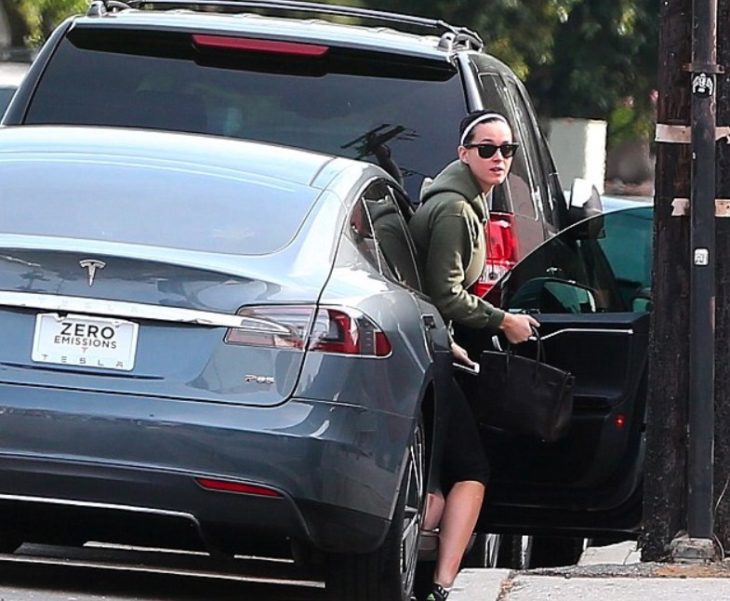 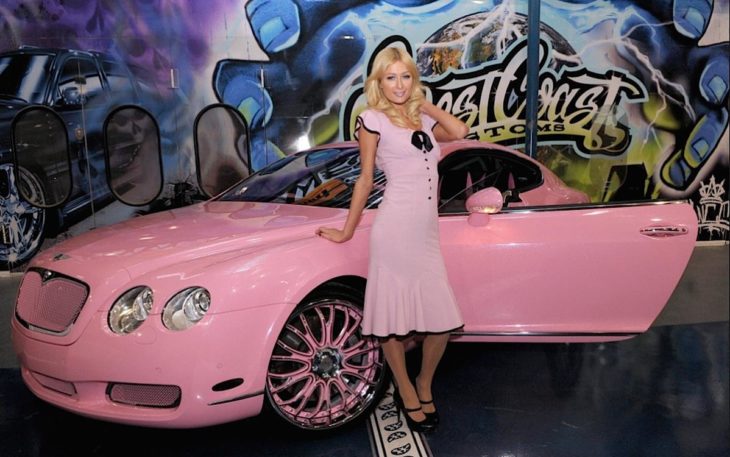 Paris Hilton is the torchbearer when it comes to pink paint jobs. She is known for her bubble-gum-pink Bentley Continental GT ($224,600), which has started the pink paint job trend among other female stars. While she is busy being a controversy queen, she has always found time to shop for exotic cars, it seems. 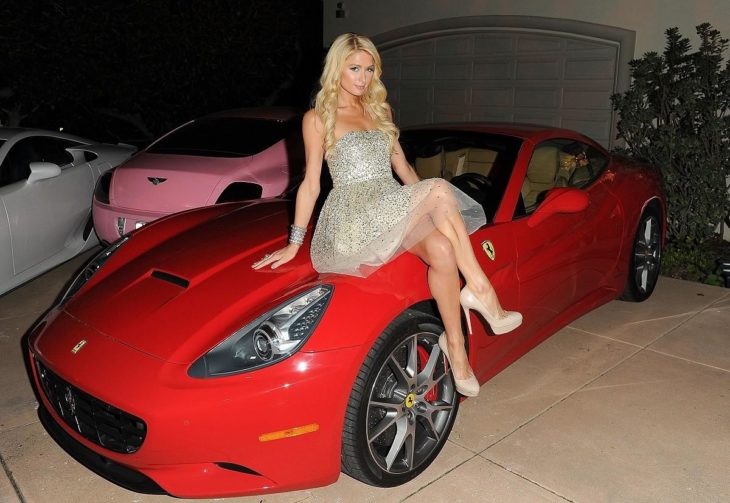 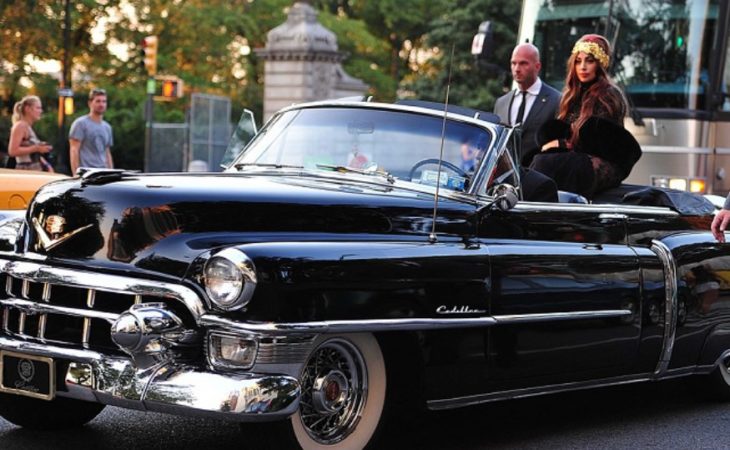 Coming from a humble background Lady Gaga has a net worth of $300 million today, and when it comes to her car garage, it will be tough for you to point out anything that represents the word “humble.” Once you enter her enviable car garage, you will find that she loves classics. The one she has most pictures with is her vintage Lincoln Continental. With its long profile, and a convertible roof, this is a must for Gaga and her friends to enjoy a long drive under the sun. 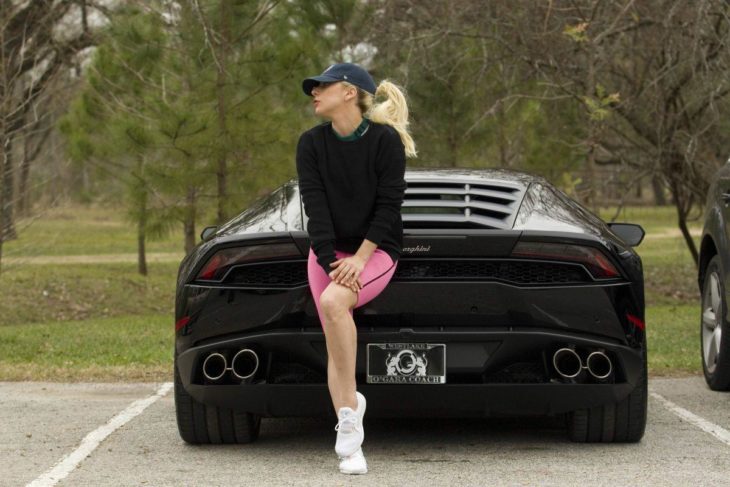 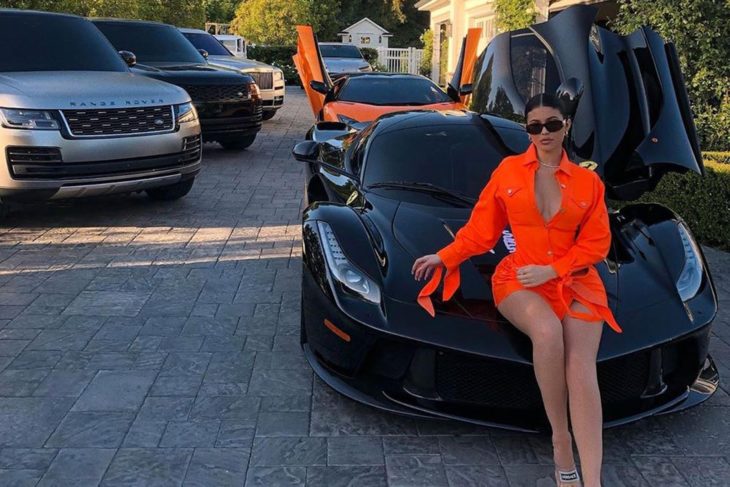 Being the world’s youngest self-made billionaire at a net worth of $1 Billion, Kylie Jenner’s car collection is surely insane, to say the least. When you are young, and have more money than you know what to do with? What do you do? Buy a new luxury car every day of the week, of course.

You shouldn’t be shocked to know that she even owns one of the world’s most expensive cars as well, the Bugatti Chiron ($2,998,000). Kylie surely knows how to spend her money well when it comes to cars, at least! 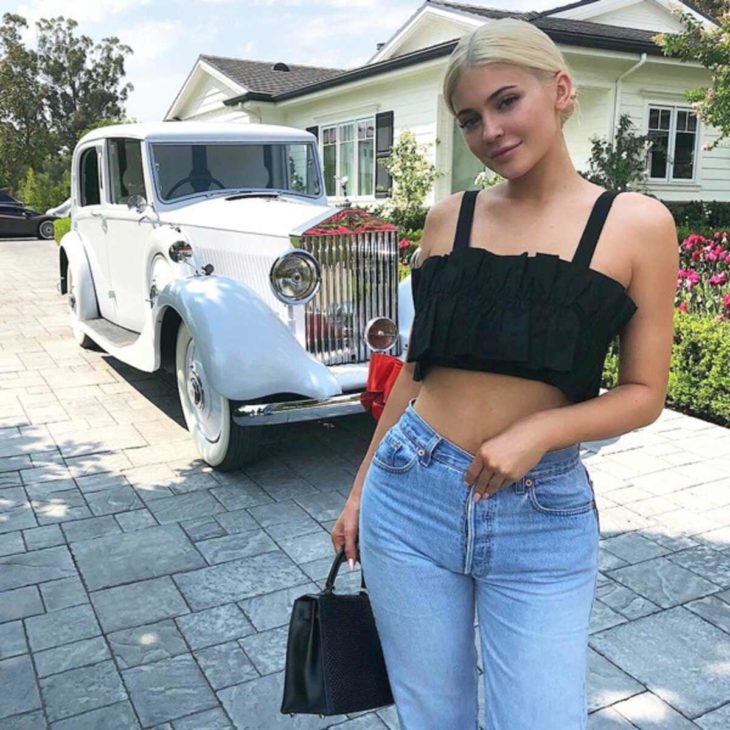 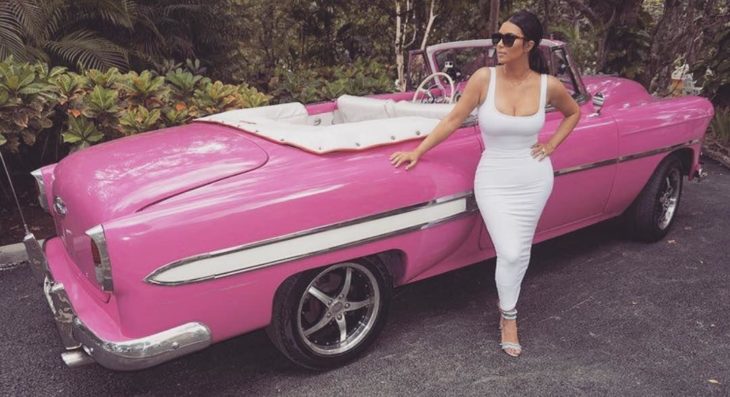 With a net worth of $370 million, Kim Kardashian is another whale in the sea which belongs to the Kardashian-Jenner family. Being into controversies is a part of her business, and Kim never shies away when it comes to showing off the money she has minted, especially on Instagram. By giving you the daily dose of drama in Catching up with the Kardashian, Kim has built up an impressive car garage that houses many of her and Kanye West’s exotics.

She has all types of cars, be it SUVs, supercars or classics. She owns a Mercedes-Benz G63, Ferrari 458 Italia, Mercedes Maybach, Rolls-Royce Phantom, Range Rover Hse, Mercedes S Class, Lamborghini Gallardo, Lamborghini Aventador, Aston Martin DB9, Rolls Royce Phantom and a Maserati Gran-Tourismo Convertible. Kim Kardashian also owns a rare SUV, Prombron Red Diamond, which costs around 1.25 million. It is a high-performance armored vehicle and one of the most expensive SUVs to be ever sold. She also gifted her husband Kanye West, a batmobile look-alike Lamborghini Aventador, which has a 6.5-liter V12 engine that is capable of pumping out 690 horsepower with a top speed of 217 mph. 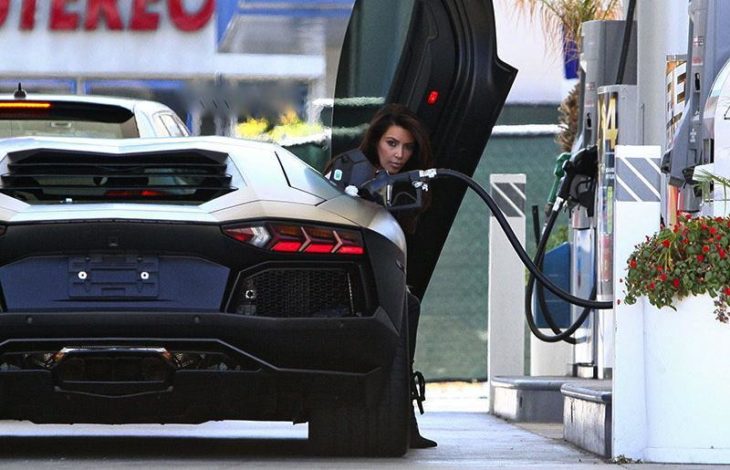 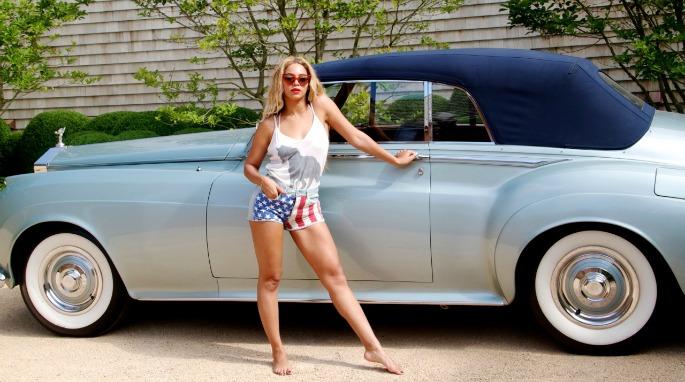 Beyonce has been and still is one of the biggest stars in the music industry. With a net worth of $400 million, she can easily put her hands on any car she likes. And with the richest hip-hop artist of all time, Jay Z, as her husband, you can only expect her car garage to look like a parking lot of a 7-star hotel.

Beyonce has invested an insane amount in some very expensive exotics. One such exotic is the Bugatti Veyron Grand Sport ($2 million), which has 1,000 horsepower and is one of the fastest cars in the world. Beyonce gifted this car to Jay Z for his birthday. It is so exotic that even Beyonce had to place an order for this Bugatti one year ahead of Jay-z’s birthday to receive it on time. Apart from the Bugatti, Beyonce and Jay Z own a whole fleet of luxury supercars like Alfa Romeo Spider, Pagani Zonda F, Ferrari F430 Spider, Porsche 911 Carrera Cabriolet, Bentley Continental GT and Mercedes-Benz SLR Mclaren. 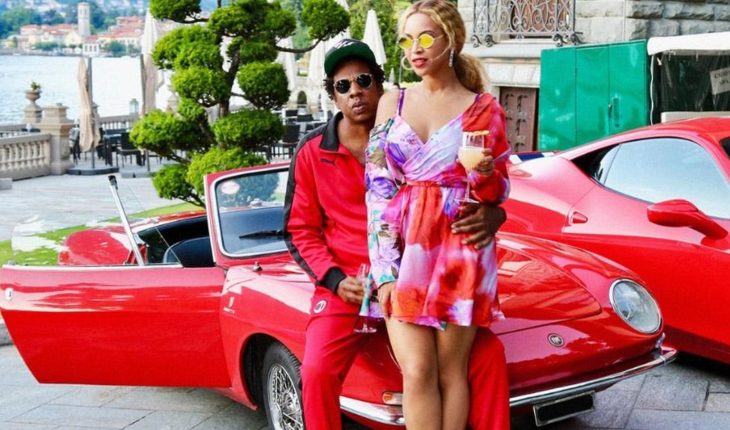 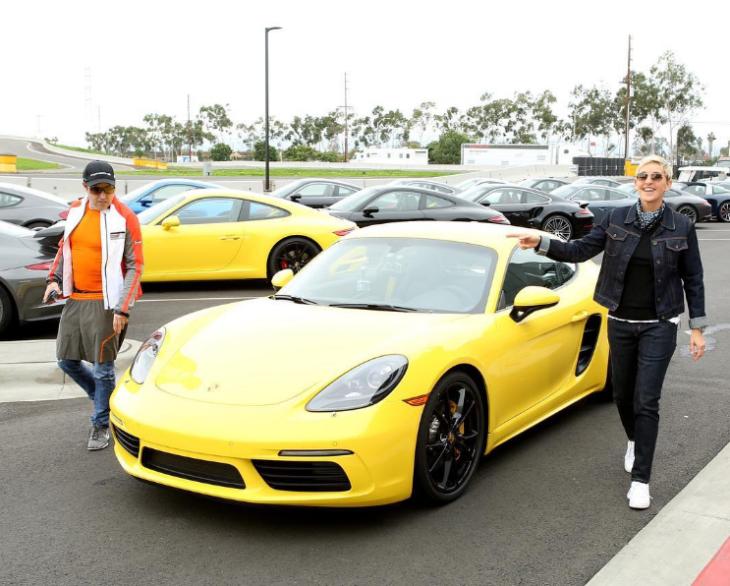 Everyone seems to love The Ellen DeGeneres show through which Ellen has got her fame. But once you see her car garage, you might just start to love it more than show. Ellen has been known for her love for the brand, Porsche. Her car collection is totally contrary to her down to earth image in the industry.

Paparazzi have spotted Ellen and her wife Portia cruising in California in their Ferrari California (2012) a lot of times. With a net worth of $450 Million, Ellen seems to buy every new Porsche car that comes out as she owns a whole portfolio of Porsche cars, which include Porsche 993, Panamera, 997 Carrera S, 4S, Turbo S and Cayenne. With that sort of a car collection, we are in no doubt that Ellen just loves to drive Porsche. Jerry Seinfeld is perhaps the greatest Porsche collector in the world, and Ellen seems to be following his footsteps. Apart from Porsche Cars she also owns Ferrari California( $202,723), Mercedes Benz 300SL Gullwing ($3,000,000) and a Range Rover Sport ($68,650). 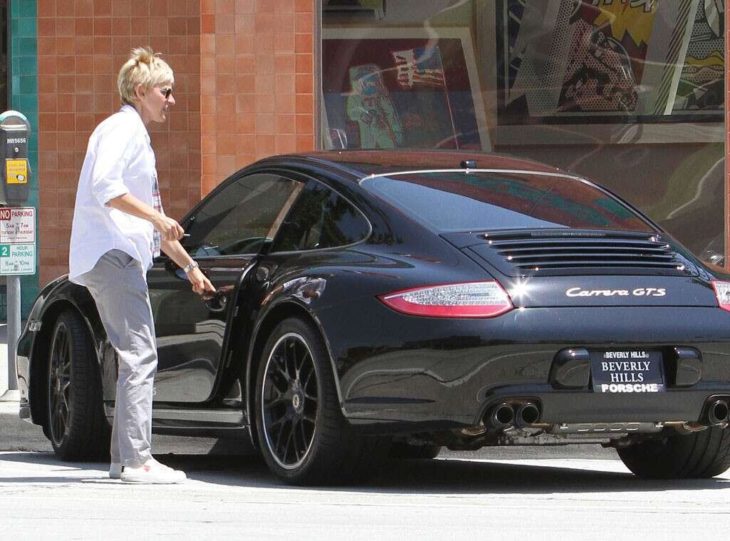