In case you didn’t already know, Prince George was born on July 22, 2013. Princess Charlotte was born on May 2, 2015, and Kate Middleton and Prince William’s third child, Prince Louis was born on April 23, 2018. But here are some other thing that you probably can’t look up n the internet about these adorable royal children. 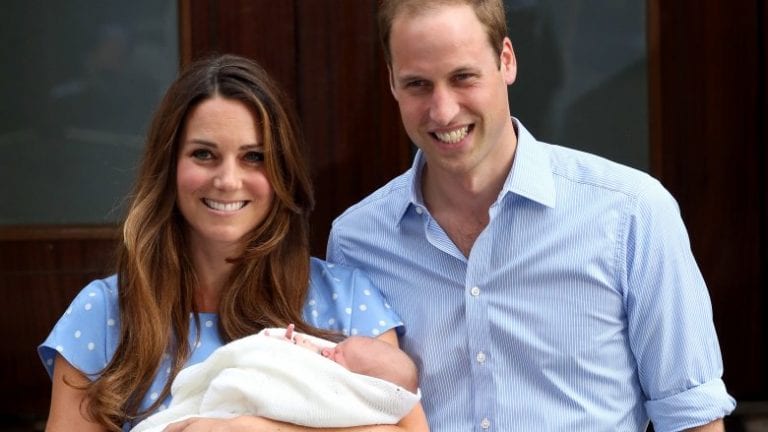 Hyperemesis gravidarum, also known as acute morning sickness, is something that Kate Middleton first suffered from during pregnancy with Prince George in 2012. Some experts say that the sickness can be “debilitating” and “miserable,” and unfortunately for Kate, she suffered again during her second, and her third pregnancy. 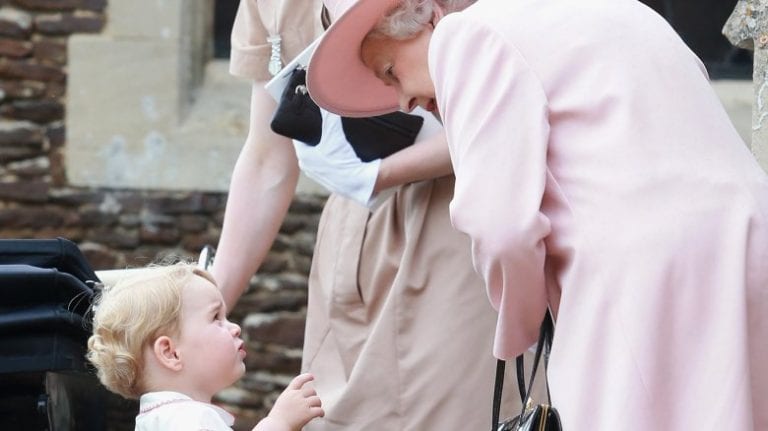 Everybody knows Queen Elizabeth II, or as her grandson, Prince George likes to call her, ‘’Gan-Gan.’’ Kate shared in a 2016 documentary, which marked Queen’s 90th birthday: “George is only two and a half and he calls her Gan-Gan. She always leaves a little gift or something in their room when we go and stay and that just shows her love for the family.” She also added: “She’s been very generous in not being forceful at all and in any of her views, but I feel she’s been there, a gentle guidance really for me.” 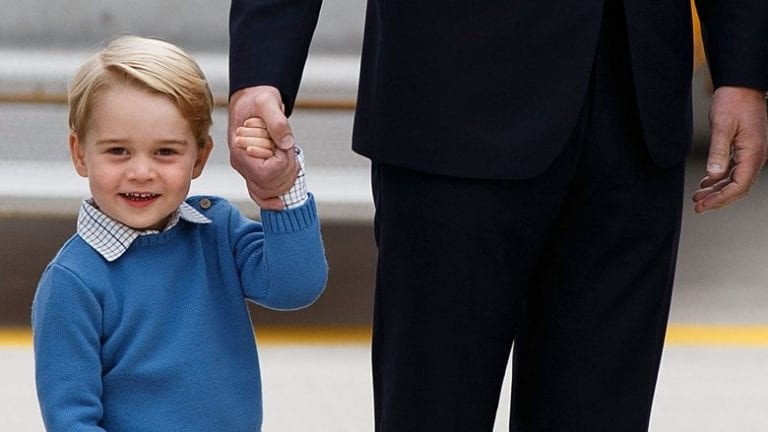 Last year in September, Prince George got Thomas’s Battersea, a private primary school in London. As stated by The Good Schools guide, the school, which is $23,000 per-year is said to be “a big, busy, slightly chaotic school for cosmopolitan parents who want their children to have the best English education money can buy.” That gets you a crazy lunch menu, which includes everything from organic milk to Mediterranean couscous and Portuguese egg custard tarts.

Prince William want them to have normality 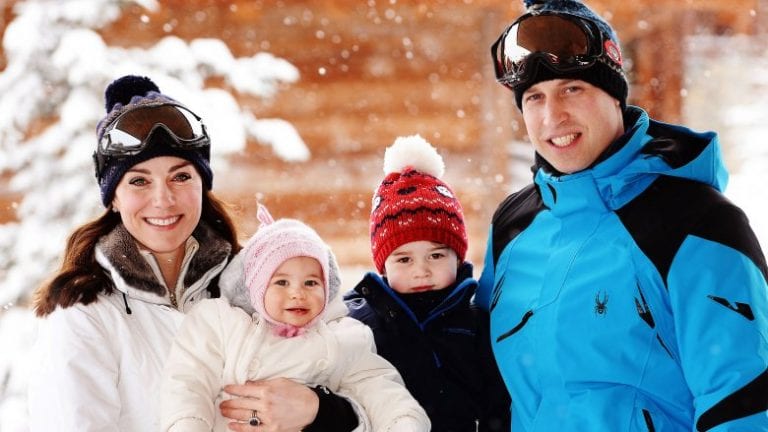 Even though they are without a doubt, the most popular children on earth, Prince William and Kate have a desire to make their childhood the most normal they can. William shared to British GQ in May 2017: “Stability at home is so important to me. I want to bring up my children in a happy, stable, secure world, and that is so important to both of us as parents. I want George to grow up in a real, living environment, I don’t want him growing up behind palace walls, he has to be out there. The media make it harder but I will fight for them to have a normal life.” 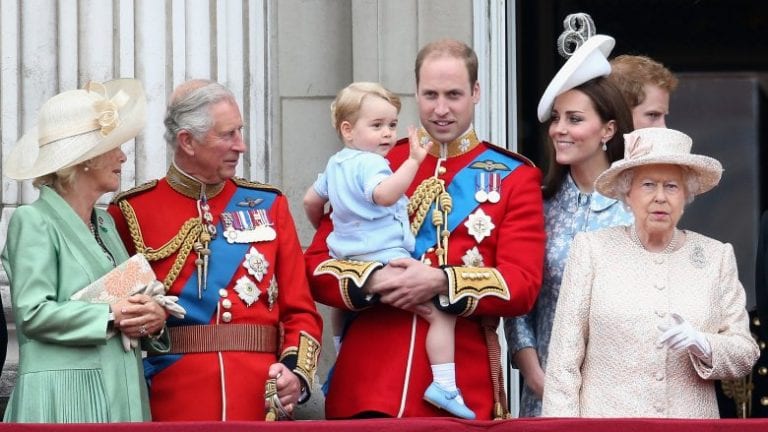 Prince George is third in line to the throne. Princess Charlotte is fourth, and Prince Louis fourth. That means Prince George will one day going to be King, but Kate and William have other things in mind at the moment. ‘’As far as we are concerned within our family unit, we are a normal family,” William revealed to BBC in 2016. “I love my children in the same way any father does, and I hope George loves me the same way any son does to his father. We are very normal in that sense.” He continued, “There’ll be a time and a place to bring George up and understand how he fits in, in the world. But right now it’s just a case of keeping a secure, stable environment around him and showing as much love as I can as a father.” 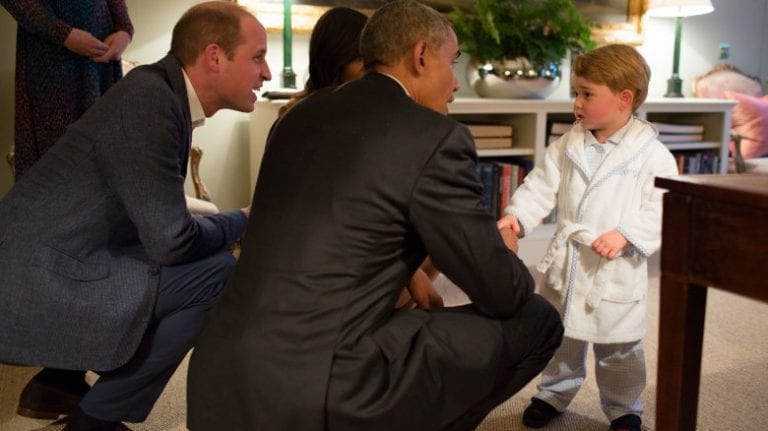 As stated by the Vogue, Prince George has been a big influence in children’s fashion ever since he was born. From blankets to sweaters, Prince George is threatening to become a fashion icon.

Vogue has addressed this international love for Prince’s outfits, and they stated that they are a “national phenomenon.” Vogue says that his style “firmly twists poeticism with pragmatism”, and that is why people are going crazy about it. “It is sweet, but not staid, traditional but not out-of-touch. Its power, just like his mother’s, is that it errs reassuringly on the side of normalcy,” Vogue declared. 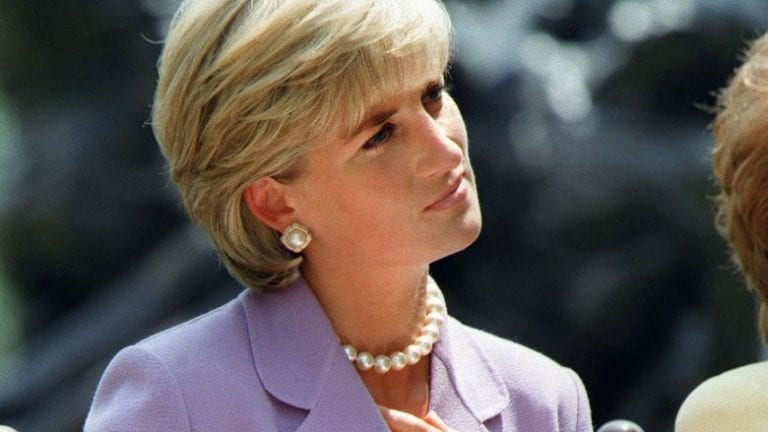 Even though they were born 20 years after Princess Diana died, Prince William and Kate are using every opportunity they get to remind them and share some stories about their ‘’Granny Diana.’’

“We’ve got more photos up around the house now of her and we talk about her a bit,” he said. “It’s hard, because obviously Catherine didn’t know her so she cannot really provide that level of detail, so I do, regularly putting George and Charlotte to bed, talk about her and just try and remind them that … there were two grandmothers in their lives. So it’s important that they know who she was and that she existed,” shared William in a 2017 documentary.

Charlotte’s full name, Charlotte Elizabeth Diana, is in memory of the late princess. 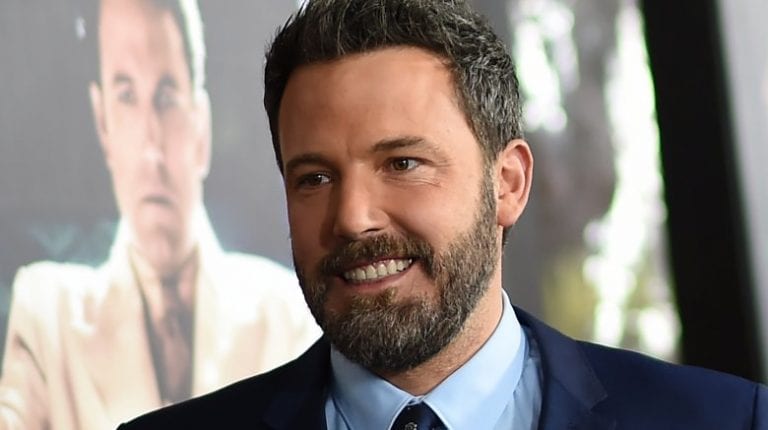 “Despite going to Windsor Castle, Tower of London and Buckingham Palace, we didn’t see one royal,” said Ben Affleck during a conversation with Graham Norton in 2016, about his visit to London. “Then, when it was raining, I took my youngest to one of those kids’ indoor play parks. It was pretty empty and then I noticed this weird vibe from the other grown-ups. They were all very well dressed and they had earpieces and I thought, ‘For a kids’ place, this is tight security.'”

“I was the very last person to realize that Prince George and Princess Charlotte were in there playing with my kid,” he revealed. “I can now tell him that he got a cold from the King of England!” 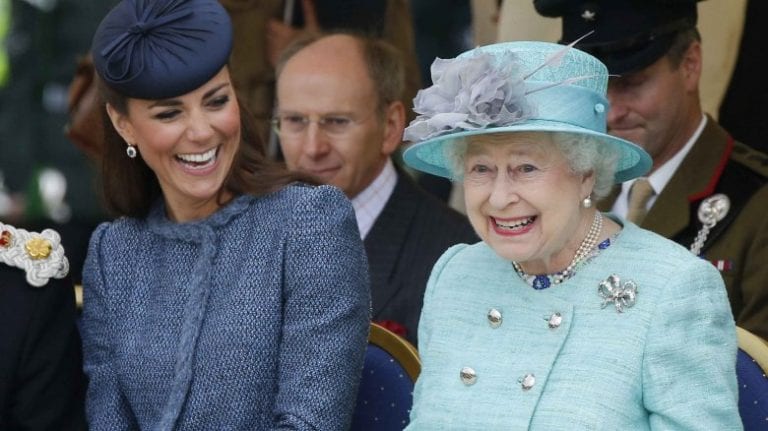 There are special royal protocols which need to be followed regarding the birth of a royal baby. The Queen is informed first before anyone else, and later there is an announcement to the public through the placement of “a foolscap-size document, with the palace letterhead, giving the baby’s gender and time of birth” onto “a wooden easel placed in the frontcourt” of Buckingham Palace. But in this modern era, you can learn everything by going to social media.

The Queen wasn’t nervous or anxious about the children’s birth. As stated by Daily Mail, for the birth of Louis, the Queen flew by helicopter into Kensington Palace a week after Prince Louis was born, for her first official visit. 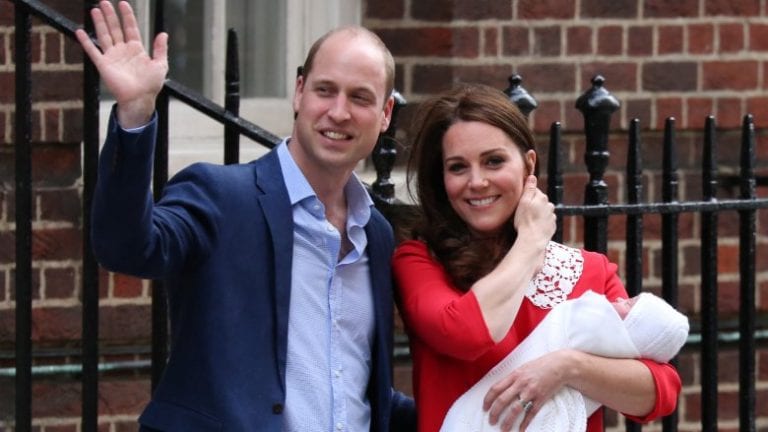 Despite weighing at 8lbs. 7oz., Prince Louis was apparently the heaviest amongst his siblings. As stated by Daily Mail, he is “heaviest future king to be born in recent history.” Princess Charlotte was the smallest, at 8lbs. 3oz

As stated by The Sun, the title for the heaviest royal belongs to Savannah Philips, the daughter of Queen Elizabeth’s grandson, Peter Phillips with 8lbs. 8oz. 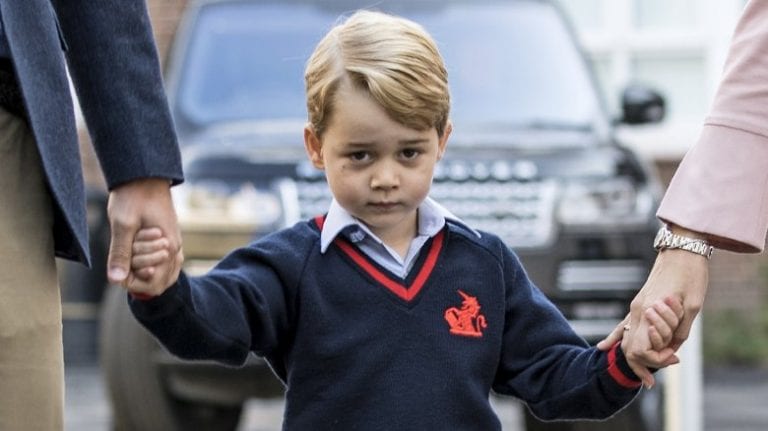 Prince George isn’t scared of thunders and lighting, as many other children are. According to Kate, he even likes storms.

While visiting Ronald McDonalds House in London on Pancake Day in 2017, Kate shared with other children that George was celebrating the Pancake Day “at his Montessori nursery.” Kate said while looking at a group of children making “chocolate crispy cakes’’: “When I try to do this with George at home, chocolate and the golden syrup goes everywhere. He makes so much mess. It’s chaos.” 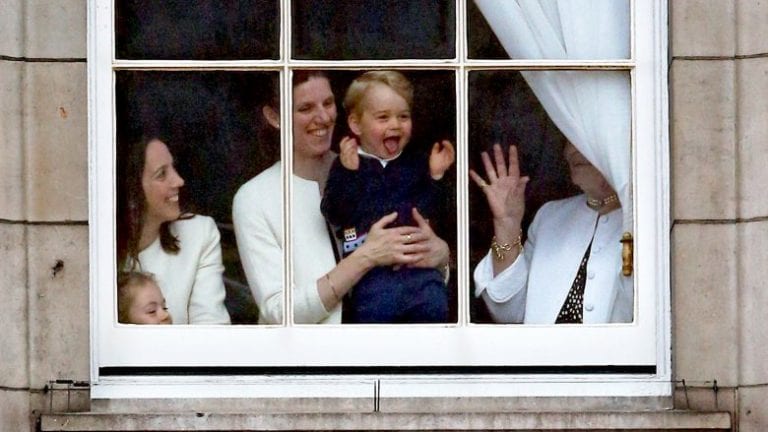 Prince William and Kate have mentioned several times that Prince George can be a little bit difficult sometimes. William shared in 2017 that his son at the time could be “noisy” and liked “charging about.” Kate revealed that he had to pass on a 2016 royal visit to India because he was ‘’too naughty.’’ “He would be running all over the place,” said Kate. Once when Kate took him to a dinosaur museum simply because he loves dinosaurs, he was “more interested in a pigeon they found there” at the end than anything else in the museum.

Charlotte is in charge 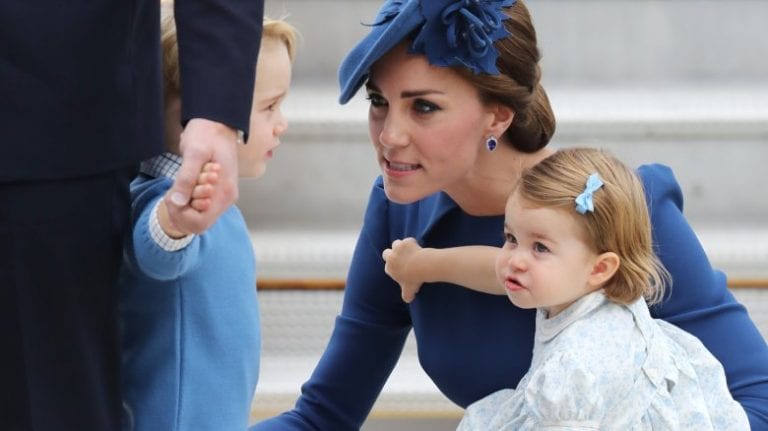 According to People, Princess Charlotte is the one who is looking after her brother and not the other way around. Prince William shared his thoughts on Charlotte when she was only 9 months old, stating that she is ‘’very easy’’ and ‘’sweet.’’

“But all the fathers say to me ‘just you wait, when they get to nine or 11 they get crazy,’” continued William. Charlotte has turned 3 in May 2018, and she was seen shortly after her party “kicking off her shoes and putting her best somersaults on display” with William playing the Maserati Royal Charity Polo Trophy.

Prince George is Not Loving his Father’s Favorite Cartoon